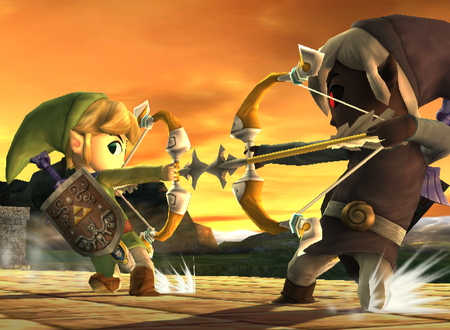 It has come to my attention that you have made many good contributions here, many of which are constructive to the growth here.

However, as a result of a move to another site, as generally agreed on by the community, few people remain here, and I believe that your contributions will remain forgotten and unseen, as well as unappreciated here.

As such, I suggest you contribute to this site, where your contributions can be shown to a larger audience, as well as generally be more appreciated.

This, however, is only a suggestion; you are free to remain here if you need. I won't pester you if you choose to stay here.

I am back with you again to ask some questions I missed last time.

I request your responses as soon as possible.

Thanks & a Quick Question Edit

Thanks - it was just pure chance I came here and saw the vandalism on Kirby (SSBB) and Diddy Kong (SSBB), though. But on a related note, I have a quick question about vandalism: When I was looking at old edits, I noticed that on Mr. Curious' user page, you twice re-added a line added by several IP users that is most likely vandalism and wondered why. Sorry to bother you! Sincerely, Ant1pr0t0n (Talk) 02:04, December 9, 2011 (UTC)

Makes sense to me! Sorry about that - I have an automatic suspicion when an IP editor claims to be a user without any supporting evidence. I just figured it was vandalism on another user's page and undid it. Whoops... Ant1pr0t0n (Talk) 02:10, December 9, 2011 (UTC)

CCD Should Return By NowEdit

Please go to CCD's channel and look at the latest comment and tell me what it says. I am currently down south in Margaret River, I hope CCD will have tweeted bybthe time I return and the suspensiion shouldbbe over. The protection of his own article expire, won't be angry, but he will unless you get the discussion unprotected. Hope to find a picture of his old avatars to put here. Now that it is unprotected, I added extra info. 58.163.175.170 14:06, January 8, 2012 (UTC)

Go toCCD's channel, and tell me what the atest domment there says and whomit is from.

That was not very friendly. I am currently down south and I am using an Ipad on 3G right now.

Okay, first, why delete my flippin' article! Look on freaking Hatena, dang it! My freaking hatena series has developement updates! But you people won't get rid of that voice acted Smash Bros. video article? That was technically a fanon too and it was allowed to stay! WTC, man! Why contribute to something on my first time when people won't even look to investigate my first article on the site I continually noted! Makes me feel like an idiot for thinking people actually wanted all this info at all!

I made another Smash Wiki

I don't see any edit of yours there, so you can't have known.

Just as I thought. You were quick to get rid of MY bullshit, but not the others. Only Bowser, Mewtwo, and Dedede have proof that they were planned, and that comes from the Japanese site for SSB64. Pit, Peach, and Meowth, who are the typical next 3 to be included in lists with them do NOT have proof. And Wario? Seems like people will put in anyone without proof and are instantly labeled as true. Except...for ones that people don't like, like Metal Mario. In summation, get rid of anyone that isn't Bowser, Mewtwo, and Dedede, rather than just what you find "wrong". (66.214.3.204 01:58, February 2, 2012 (UTC))

Gunblazer, I respect your position here on Smashwiki. Since I do not wish to troll, I would like to discuss the proposed unofficial tier list and where objections fall, etc. just some clarifications. I am not intending to argue with you.

This template is affecting the main space in articles because of the "talk" and facebook "like" button this template needs formatting in order to fix it. I am clueless at this point. PentagonAVTFD: Charged Up 05:49, February 23, 2012 (UTC)

I Beg to Differ Edit

Explain why you have rude manners and you removed my messages from yours and Toomai's talk page. If this IP I am editing with now gets blocked you'll be sorry. I am at a time of year till December where I can stay at an IP Address for a very long time, for many weeks.

If You're-a Gonna Be an Admin Edit

No sorting me out and no blocking my IPs are account for a very unreasonably length. I will appreciete you if you promise you won't be blocking me and Daipenmon doesn't get admin rights. Lastly do not call me Mr. Curious anymore and anthing people stop me from doing on this wiki I'll do on the NIWA Wiki like Crawling, Wall Jumping and Multi-Jumping. And you've got a hell to play if I get this IP Blocked as long as I can't edit my talk page. I'll take $10 from you.

Also, promise you'll remove Conker's Atrocious admin rights or I'll use on you the Dark cannon.

I'm sorry for blanking the page.I was considering this site the best video game site and heck, nothing is wrong with me since I like all of the admins, even though most of them have undone my edits. ~~PB&Jotterisnumber1~~

I agree with you, fanon should be deleted. The only fanon articles we should kept are:

I keep removing to remove this edit on that article but someone keeps declining. The article does not care about what CCD's doing right now, so it doesvnot need to bed added in. It's not mentioned on the Wikia article so that info is unnecessary. 58.163.175.185 06:18, April 17, 2012 (UTC)

There is a vandal on the loose. He created the pages Mario Ass, Alvin, Palette Swaps for SSB4, and others. Would you mind blocking him plz? ~~PB&Jotterisnumber1~~

Look. To be an admin, you have to go and make a request there.

Hello, I don't know you personally and I'm not too familiar with the site, but I very much appreciate it. Me and a few other people are starting a site, although it's somewhat old, it's very empty and lacks pages. I wanted to make a FAQ page on SSB for the N64, but I need some specific information on the game (mostly how to unlock the characters) and I wanted to know if I would be able to get that information and put it on my site (giving credit of course). My Site is called Boss Bashers (http://bossbashers.yolasite.com/) it may be somewhat poorly made but it's still in progress. I would very much appreciated it if you gave it some thought and I'm sorry if this has inconvenienced you in any way. Have a good morning / afternoon. -Kalle

Way To Stop Me Edit

For one I've decided to stop talking to Toomai till he stops blocking me. [User called RRabbit42 has tracked my edits down, knows every wiki I've been on and every IP that is mine]. He's keft out IP Ranges of mine onto Admin talk pages. Don't Anybody Give that to Toomai. Get it.

You do know I can see that clear as day, right? Toomai Glittershine

Retrieved from "https://supersmashbros.fandom.com/wiki/Message_Wall:GunBlazer/User_talk_archive"
Community content is available under CC-BY-SA unless otherwise noted.