SmashWiki has no interest in copying images from this site, and any such copies will be deleted on sight. It would be appreciated if you would return the favour by not copying SmashWiki's images. Other Wikia-NIWA wiki pairs have this kind of arrangement, such as Kirby Wiki and WiKirby. I'm sure any reasonably skilled contributor could create their own version of any image you want to have. Toomai Glittershine

Well the SmashWiki needs your images so that it can present the high quality images rather than making fan-art. I want to get the real images so that the fan-art policies can't be violated. And another thing, we get captures for each page to use on articles like Muppet wiki.--GuitarHeroPerry (talk) 17:48, September 7, 2013 (UTC)

If you want to be pedantic, the Diddy palette image is also technically fanart, since the coloured bars are not part of the in-game textures. Toomai Glittershine

Opening a new section about this to prevent whatever my computer did earlier.
Can you please explain to me how this looks natural? Granted, it has been a while since I played with a 4:3 aspect ratio, but those bars just look off. Teh Player (talk) 23:29, September 7, 2013 (UTC)

GuitarHeroPerry: "racist or rude"? That really doesn't make any sense... It's not racist or rude to say the images don't look right because of their formatting or size. I don't know enough to tell whether the images are distorted or not, but if they are that's important information and needs looking at -- sannse (help forum | blog) 07:02, September 8, 2013 (UTC)

The images that I upload are clean in their different aspect ratios with SSBB in standard and Melee on wide. Their formats are good and didn't need cropping at all. Here's an example of a full-screen transfer image that I uploaded for the menu on Brawl: 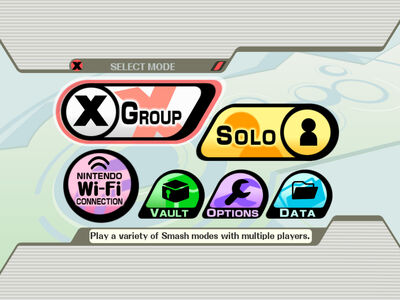 The pan and scan aspect ratio for Brawl was done by using widescreen hack and force 4:3 on the Dolphin emulator that I use for enhanced quality images.--GuitarHeroPerry (talk) 14:16, September 8, 2013 (UTC)

Just because a user may be a sockpuppet doesn't automatically mean that you should undo their edit. TheSMASHFan (talk) 19:03, September 8, 2013 (UTC)

It's doing it because they want to use the old photo and I'm trying to get them to quit and leave the new one on there. I've reported the sockpuppet account to the staff and vstf so they can help resolve the problem.--GuitarHeroPerry (talk) 19:06, September 8, 2013 (UTC)

We should try to be different than NIWA. Otherwise, we just admit that they're better than us. Skillz that Killz 19:22, September 8, 2013 (UTC)

Are you going to respond? Because, I got a pizza in the oven, so if you want to just keep edit-warring with that one guy without explanation, I can just go. Skillz that Killz 19:58, September 8, 2013 (UTC)

I think you are deceiving me into having pizza and I get pizza from somewhere on Planet Baab. I'm not edit warring just to do for fun. The staff are going to take action against you of edit warring.--GuitarHeroPerry (talk) 20:00, September 8, 2013 (UTC)

I'm not well-versed in bad animated films, so I have no clue what Planet Baab is. Also, it seems you're not going to give me a proper response, so I have a pizza to enjoy. Skillz that Killz 20:03, September 8, 2013 (UTC)

Look, the reason I'm using images from Smash Wiki because the wiki needs to be larger and popular to other users. Also, if you haven't noticed that Planet Baab is a planet where the Baabians live and I'm a Baabian from the film Escape from Planet Earth.--GuitarHeroPerry (talk) 20:09, September 8, 2013 (UTC)

I have a reason they should be on the site. They need to be here because that helps present the correct color palette to the character's costumes.--GuitarHeroPerry (talk) 21:35, September 8, 2013 (UTC)

Would you be able to get a white background behind them or something so it looks better? TheSMASHFan (talk) 21:44, September 8, 2013 (UTC)

I feel it should be said that GuitarHeroPerry is a known problem user as the evidence just keeps stacking up. And yes, I am a sock of James Heart, which Sannse will confirm. Wild Rice 22:52, September 8, 2013 (UTC)

I've got a topic that you missed (or you're just getting to it and this will be absolutely pointless) but you kinda missed the No-Ping Hit. Glad to help.

I'm sorry to bother you but I can't seem to find that article. Would you mind giving me a hand?

I'm trying to find the No-Ping Hit itself, is it located in the PING article or something? Because if it isn't, I made a spare article just in case. 03:21, September 9, 2013 (AEST)

Hello. I have noticed that you have a severe attitude problem. Just because a user reverts your edit does not make them "disruptive". Everyone, including Wikia staff, has told you to stop copying images from SmashWiki, but you continually refuse. Learn to collaborate and not be so self-centered, or stop editing wikis.

Retrieved from "https://supersmashbros.fandom.com/wiki/Message_Wall:GuitarHeroPerry/User_talk_archive"
Community content is available under CC-BY-SA unless otherwise noted.