Unknown
Meowth (ニャース, Nyāsu, Nyarth in Japanese language versions) is a fictional creature in the Pokémon media franchise. It is a Pokémon that comes out of a Poké Ball.

Despite popular rumors, it was unlikely that Meowth was ever planned to be a playable fighter in Super Smash Bros 64.

Meowth makes an appearance as a Pokémon that appears out of a Poké Ball in Super Smash Bros. Meowth uses Pay Day as his attack. Meowth then jumps in the air, scattering coins in all directions. Any character caught in the radius of this attack takes damage. The attack radius of Pay Day is short so it can be easy to avoid. However, the player can become trapped in the barrage of coins. It's possible to take 30% damage in this attack, like that of a Bob-omb. Meowth's attack does not harm the summoner.

Meowth returns in Super Smash Bros. Melee but not as a Poké Ball Pokémon. Instead, he has been relegated to a role as a trophy. This trophy is unlocked after getting the "Smash Blue" trophies (from the All-Star single-player mode) for all 25 playable characters. Interestingly, his description has nothing to do with his actual behavior in the Pokémon games, but refers to a short animation created to showcase the GameCube's graphics, that was originally going to be a game called Meowth's Party but was canceled. It more so relates to the Meowth in the anime. The trophy description is as follows:

Meowth
This...is Meowth's dream. Meowth strides all over the globe scattering invitations to other Pokemon, insisting they come to "Meowth's Party". At this wonderful party, guests are packed in like sardines as Meowth climbs up the stage with its faithful guitar. It strikes a chord, pauses, and then rocks their world!

Meowth reappears in Super Smash Bros. Brawl as a Poké Ball Pokémon again, with roughly the same effect as he did in Super Smash Bros. This time, Meowth throws a barrage of coins at the opponent instead of quickly of scattering coins in all directions though he will turn face and continue the attack if the opponent(s) is behind him. In addition, falling from above onto Meowth will cause the victim to be caught and then take heavy damage, the maximum being 390% if Smash Attacks are used in conjunction. Oddly enough, if someone attacks it from behind its Pay Day move strengthens.

Meowth
A Scratch Cat Pokémon. It's one of the most famous Pokémon and very fond of things that sparkle--the gold medallion on its head could be seen as an indicator of this infatuation. There are many Pokémon that resemble cats, but Meowth is the only one that can use Pay Day to receive coins at the end of battle. It evolves into Persian.

As A Poké Ball Pokémon

Meowth is shown to still use its Pay Day attack.

Meowth is a Normal-type, Scratch Cat Pokemon who absolutely loves anything shiny. It's a creature of the night, and it's not fighting unusual to discover a Meowth and a Murkrow fighting over their finds. Meowth's attack Pay Day can deal a ton of damage if an opponent gets caught in it. How purrfect!

As A Poké Ball Pokémon

Meowth returns in Ultimate as a Poké Ball summon, keeping the same behavior as before.

Meowth also appears as an Advanced-class Support spirit, available for purchase at the shop or as a random encounter at the Spirit Board. Its spirit battle is a regular battle against 2 gold Isabelle puppet fighters at Golden Plains. This spirit battle represents the move Pay Day, a move Meowth uses when being summoned. 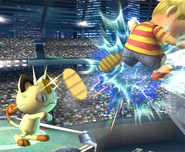 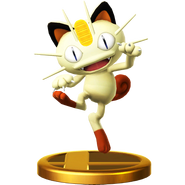 The English Wikipedia has an article on Meowth. Based on the article's quality, it can or can not be used to improve this article.
Community content is available under CC-BY-SA unless otherwise noted.
Advertisement