Megavitamins is Dr Mario's Standard Special Move. He launches a Megavitamin forward in a similar fashion to Mario's Fireball, though with different properties

In Super Smash Bros. Melee, Megavitamins bounce higher, fall faster, and deal 8% damage, being more than Fireball at 6%. The move also plays the unique sound effects from Dr. Mario. Despite its physical appearance, Megavitamins can be absorbed.

In Super Smash. Bros. for Nintendo 3DS and Wii U, Megavitamins were considerably weakened, dealing 5% up close and 4% far, and have considerably more startup and end lag, and have shorter duration. However, they are slightly larger, cover more distance, and are now recognized as physical projectiles, preventing them from being absorbed.

Megavitamins being used in Super Smash Bros. for Nintendo 3DS 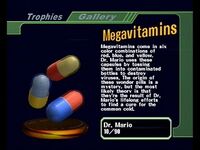 Megavitamins come in six color combinations of red, blue and yellow. Dr. Mario uses these capsules by tossing them into contaminated bottles to destroy viruses. The origin of these wonder pills is a mystery, but the most likely theory is that they're the result of Dr. Mario's lifelong efforts to find a cure for the common cold.

Fast Capsule is one of Dr. Mario's Standard Special Moves that can used via customization. This works similarly to Mario's Fast Fireball, as Dr. Mario throws a smaller megavitamin which goes farther and faster but does less damage.

Mega Capsule is one of Dr. Mario's Standard Special Moves that can be used via customization. It's similar to Mario's Fire Orb. Dr. Mario throws a giant megavitamin which travels slower but does more damage and gives continuous damage. Dr. Mario also will take time to charge it up.

In Super Smash Bros. Brawl, Megavitamins appear as a sticker.