This article is about Mega Man's appearance in Super Smash Bros. for Nintendo 3DS and Wii U. For other uses, see Mega Man.

No
Mega Man is the main protagonist from Capcom's eponymous series. He is the third non-Nintendo character to appear in the Super Smash Bros. series, following Solid Snake and Sonic the Hedgehog. He was revealed at E3 2013 and was the second newcomer to be revealed. Despite having spoken in his home series, Mega Man is voiceless.

Mega Man currently ranks 27th on the tier list, placing him in the lower-mid C tier. This is due to his large number of projectiles that give him good spacing options, as well as a very strong air game. However, fast characters and characters with reflectors can turn his projectile game against him, and he possesses few moves with KO power, with most of them having high ending lag and requiring complicated kill set-ups.

In long range, Mega Man is a very versatile character. Mega Buster is fast, although not having high range, but can keep enemies at bay and interrupt their approaches. His Forward Tilt gives him this advantage as it's the only one in the game that can be used while walking. Crash Bomber is good to distract the opponents, as they will either try to remove the bomb or shield it, giving an open spot to attack. His Leaf Shield, while overlooked by some players because it blocks most of his actions, has good utility, being able to dish extra damage during grabs as well as blocking projectiles.

When enemies can reach Mega Man for close-combat, he has a few tools that can help him knock them back, such as his Mega Upper (Up Tilt) and Slide (Down Tilt), that are fast enough to get enemies by surprise, with Mega Upper being powerful enough to kill opponents at 100% if sweetspotted. Another good way to keep enemies at bay is to move backwards with short hops while using Neutral Aerial, in order to keep up his zoning game without having to move back and forth. He is also good in the air, with his aerial attacks having great utility. Flame Sword (Forward Aerial) has high priority and a disjointed hitbox, while Slash Claw (Back Aerial) is a very fast multi-hit attack with powerful knockback at the end of the attack. In addition, his Air Shooter (Up Aerial) works similar to Mr. Game & Watch's Up Aerial by having a pushbox, but one that also causes damage, in addition to hitting multiple times. Finally, his Hard Knuckle (Down Aerial) is a solid Meteor Smash, and it's the only ranged Meteor Smash in the game.

One of Mega Man's problems, however, lies in his predictable recovery, relying only on Rush Coil to come back to the stage and because of that he has no horizontal recovery. Also, when pressured, Mega Man has little to do, as characters such as Pit and Fox can reflect his projectiles and punish him easily. His lack of proper KO'ing moves allied with the fact that his Smash Attacks have high ending lag, especially his Up and Down Smashes (as his arms have to vent), makes Mega Man a hard character to kill with.

The main hero from Capcom's 1987 action game, Mega Man. He travels from stage to stage, defeating Robot Masters to obtain new weapons. He uses this vast arsenal in Smash Bros. in a variety of ways. Metal Blades, for example, can be fired in eight directions and picked up off the ground!

Mega Man has more than 10 different weapons at his disposal. His forward air attack, Flame Sword, affects a wide area and doesn't leave much of an opening, making it useful in a variety of situations. His Leaf Shield special spins four leaves around him to deflect projectiles or hurt foes. He can also fire the leaves forward.

Mega Man newcomer artwork based on the cover art of his original games.

Mega Man with Rush which is part of his recovery.

Mega Man using Leaf Shield which can absorb weak attacks and can also hit opponents on its own.

Mega Man being showcased to see what customizable moves are available for him including different renditions of his recovery and Leaf Shield.

Mega Man in his metal form.

All of Mega Man's incarnations that are a part of his Final Smash. Mega Man X, Mega Man.EXE, Mega Man Starforce, and Mega Man Volnutt. 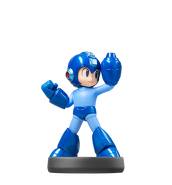 Comparison of animations between the SSB WiiU and 8-bit NES versions.

Mega Man along with Ryu.