Mega Man, originally named Rock, was built in the year 200X (retconned to 20XX in later games to keep his creation in the future) by Dr. Light as a helper and lab assistant. When the mad scientist Dr. Wily stole and reprogrammed Dr. Light's six next generation Robot Masters, Rock volunteered to stop Wily and was upgraded by Dr. Light for combat purposes, adopting the new name Mega Man. Mega Man's primary weapon is the Mega Buster, a transformable arm mounted plasma cannon. He also possesses the Variable Weapon System, which allows Mega Man to copy a defeated Robot Master's special weapon. Using these and his strong desire to bring peace to the world, he has repeatedly thwarted Wily's plans. To date, Mega Man has appeared in over 50 games over the last 25 years. In Super Smash Bros. for Nintendo 3DS and Wii U is his first major, non-cameo game appearance since Mega Man 10 in 2010.

Despite the fact that Mega Man has had voice actors in some media such as Mega Man 8, Marvel vs. Capcom and Mega Man Powered Up, he remains silent in Super Smash Bros. for Nintendo 3DS and Wii U; Pac-Man shares this in common with him, likely to reference the era of gaming before voice acting was introduced and became more commonplace. 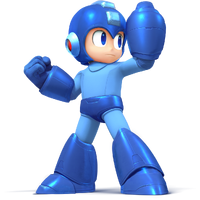 Mega Man makes his Smash Bros. debut as a playable character in Super Smash Bros. for Nintendo 3DS and Wii U. Most of his attacks involve using various special weapons obtained from various Robot Masters he has defeated from the original series. His Final Smash is Mega Legends, which involves the other incarnations of the Mega Man character appearing alongside the original and fires a Mega Buster at the opponent.

Mega Man
The main hero from Capcom's 1987 action game, Mega Man. He travels from stage to stage, defeating Robot Masters to obtain new weapons. He uses this vast arsenal in Smash Bros. in a variety of ways. Metal Blades, for example, can be fired in eight directions and picked up off the ground!

Mega Man (Alt.)
Mega Man has more than 10 different weapons at his disposal. His forward air attack, Flame Sword, affects a wide area and doesn't leave much of an opening, making it useful in a variety of situations. His Leaf Shield special spins four leaves around him to deflect projectiles or hurt foes. He can also fire the leaves forward. 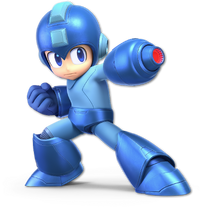 Mega Man returns in Super Smash Bros. Ultimate. However, unlike in the previous installment, he is an unlockable character. He is classified as fighter #46. His Final Smash, Mega Legends, has been upgraded with Proto Man and Bass from the Mega Man series joining in.