All of the "Co-Stars" of Mega Man appear and use their Mega Buster simultaneously.

Mega Man uses the Black Hole Bomb to catch the opponents, and then Mega Man X (Mega Man X), Geo Stelar and Omega-Xis (Mega Man Star Force), Mega Man Volnutt (Mega Man Legends), and MegaMan.EXE (Mega Man Battle Network) all appear alongside Mega Man. All of them then use their Busters to fire multiple laser beams against the trapped opponents. The screen will focus for a split second on the character being hit, and then the cutscene will end as the character is blasted away.

In Super Smash Bros. Ultimate, Proto Man and Bass are also featured in his Final Smash as well.

The Black Hole Bomb is a weapon that Mega Man receives from Galaxy Man in Mega Man 9 for the Wii, Xbox 360, and PS3. It's possible that the origin of the rainbow-like laser is from the Mega Man anniversary images, in which Mega Man appears alongside his "co-stars". However, Mega Man didn't shoot the laser in his anniversary images. The rainbow laser may be a reference to two of the classic Mega Man's development names, "Rainbow Warrior Miracle Kid" and "The Battle Rainbow Rockman". 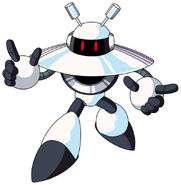 Galaxy Man, who give the Black Hole Bomb after defeat

The Black Hole bomb used in the game.

Mega Man's final smash with 7 CPU's trapped in it.