This article is about Marth's appearance in Super Smash Bros. for Nintendo 3DS and Wii U. For other uses, see Marth.

Marth returns as a veteran fighter in Super Smash Bros. for Nintendo 3DS and Wii U, revealed on November 8, 2013.

Marth is one of the characters who received the most considerable nerfs in the entire game, with his combo and KO potential being greatly decreased. He got very few buffs that improve his recovery. Because of that he is a much more defensive character, relying mostly on counters and punishing.

Appearance-wise, Marth has more detailed structure to match his most recent games. His cloak and robe have a more cyan tone of blue and are longer; however his cloak is not as wide as in Brawl. His shoulderpads are also more round while his boots have a different design. Overall, Marth has a more "delicate" and younger appearance.

Up Taunt: Marth points his blade to the sky, which flashes.

Side Taunt: Marth swings his blade in front of him, then sheathes it.

The first hero from the Fire Emblem series, Marth is the prince of Altea and descendant of the hero Anri. In Smash Bros., he's known as an exceptional swordfighter, swinging his blade with grace. Striking with the tip will maximize the damage dealt. Teach aggressive foes a lesson with his strong Counter move.

Marth's side special Dancing Blade is a four-stage attack. Aim and time your strikes carefully! The tip of his sword does the most damage. For his up smash, Justice Sword, he thrusts his blade into the air. You can use it to block attacks from above and launch nearby foes. 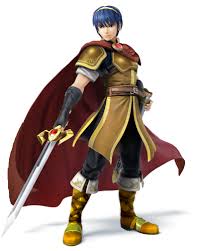 Palette Swap
Add a photo to this gallery 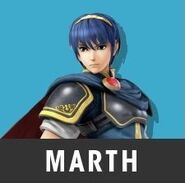 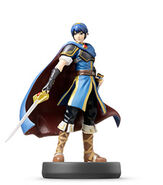 Marth being screen KO'd
Add a photo to this gallery

Retrieved from "https://supersmashbros.fandom.com/wiki/Marth_(Super_Smash_Bros._for_Nintendo_3DS_and_Wii_U)?oldid=491916"
Community content is available under CC-BY-SA unless otherwise noted.