View source
watch 01:59
Marth in Super Smash Bros. Melee
Do you like this video?
Play Sound

This article is about Marth's appearance in Super Smash Bros. Melee. For the character in other contexts, see Marth; for information about Marth's clone, see Roy.

Hikaru Midorikawa
Marth (マルス, Marth) debuted in the first game of the Fire Emblem series, Fire Emblem: Shadow Dragon and the Blade of Light (Ankoku Ryū to Hikari no Tsurugi). Marth was placed in Super Smash Bros. Melee due to heavy requests from Japanese players; as his games had never been released outside of Japan prior to Melee, his character was among the most obscure in the game in other regions. His popularity as a character, alongside Roy, eventually caused Nintendo to begin releasing the Fire Emblem games internationally; the first internationally released game came two years after Melee.

Marth currently ranks 2nd place on the tier list due to his excellent overall speed, disjointed range, priority, power when tipped attacks are landed, combo and edgeguard ability, metagame, and having many favorable matchups. On the downside, he lacks a projectile, and has an easily edgeguarded recovery, although several characters also have this problem.

There are three ways to unlock him:

Marth is fought on the Fountain of Dreams stage, with the track Fire Emblem playing.

Note: Quitting via Pause menu from Regular Match with each character will not trigger the challenge for this character. The quickest methods in Regular Match is to set stock to one and Self-destruct until it's "Game Over" (if there's an option to Continue, opt to not keep playing) or go to VS. mode, select a level nine Ness CPU, then go to Jungle Japes. Ness will constantly self-destruct. Do one of these with all fourteen starters and Marth can be challenged and unlocked if defeated. 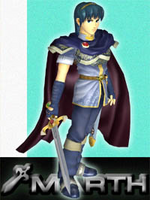 Marth relies mostly on edgeguarding for KOs. Almost all of Marth's attacks have a sweetspot at the tip of his blade that increases damage and knockback if it connects, while his attacks are weaker if the stem of the blade connects instead. Marth is also known for being able to combo both Fast fallers and Floaty characters. He has a long wavedash, a great SHFFL, and a great dashdance. If sweetspotted, Marth's down aerial is a fast, powerful spike (Meteor Smash in PAL editions), although it does have lots of ending and landing lag, which means it is easily punishable if missed or not L-canceled. Marth also has the longest non-tether grab in the game, which gives him a chain grab on the Star Fox characters. Although Marth does lack a projectile, he can break most projectiles using his Side Smash, but this does not work on Blaster, Boomerang (Marth can only return the Boomerang harmlessly), Fire Breath, PK Fire, or Needle Storm. Marth's versatility allows players to easily KO their opponents at very low percentages, a key difference between him and Roy in terms of KO potential, which is why he is placed higher on the tier list than Roy.

Marth's biggest weakness is his recovery. Although Dolphin Slash travels far vertically, it travels marginally horizontally. However, Marth can use the first hit of Dancing Blade to add horizontal boost for recovery. When Marth is in a helpless state after using Dolphin Slash, he has very slow lateral movement. Dolphin Slash also has a large amount of landing lag, which opponents can often capitalize on.

Overall, Marth is easily an extremely dangerous opponent for virtually every character, and only has a few weaknesses that are quickly overcome when mastered.

Like some other characters, Marth received some changes in the PAL version of Melee, which slightly nerfed him overall, as he lost the ability to reliably KO and edge-guard with his down aerial. However, because other top-tiered characters, such as Fox and Sheik, were noticeably nerfed, Marth has an easier time fighting against them, improving his matchups overall. As such, he is considered to be better relative to most of the top tier in PAL than in NTSC, which reflects in his PAL tier list placement, where he is ranked 2nd instead of his current 3rd place.

Note: For simplicity; if, for example, Marth's blade does 4% damage while the tip does 6%, and the attack has no other hitboxes, it is written as 4%/6%.

When using Marth's Dancing Blade, after the initial strike, up to 3 more swings can be done in one sequence. There are multiple combinations of this attack after the initial swing: Up, Neutral/Forward, or Down. The third swing in the sequence is a very useful spike if the Down is pressed. It can be used to get kills at low percentages, by knocking the opponent off the ledge, or on the edge as opponents make their way back toward the ledge. Time it so by the time the opponent is right back at the ledge, the third swing comes out.

By starting Marth's Dolphin Slash, and immediately pressing the opposite direction to which he is currently facing, Marth will begin the first frame of his attack normally, but will change directions to finish the attack as if facing the other way. This variation has significantly increased knockback, but must be done at close range. The reason for this is that when Marth does his Dolphin Slash, he holds his sword behind him for a second. Given that Marth's attack are more powerful at the tip of the sword, as well as earlier into the Dolphin Slash, turning around at the start allows him to hit when the conditions are the best. This technique is also commonly performed out of a shield, by jump-canceling.

Oddly enough, Marth's counterattack has a second hit box which is much more powerful than the first. This hitbox is located in the first few pixels behind him and even more behind and above him. The blow is about as powerful as his Untipped Forward Smash, and serves as a flashy kill move in Free For Alls or 2v2s. However, it may only be used when one enemy (or teammate) is attacking from the front while the other approached from behind, making the move extremely situational.

The Ken Combo is probably the most famous Marth combo of all. If the opponent does not DI Marth's Forward Aerial correctly, it can connect into his Down Aerial's spike hitbox.

In addition to the normal trophy about Marth as a character, there are two trophies about him as a fighter, unlocked by completing the Adventure and All-Star modes respectively with Marth on any difficulty.

Marth
The betrayed prince of the Kingdom of Altea, the blood of the hero Anri flows in Marth's veins. He was forced into exile when the kingdom of Dolua invaded Altea. Then, wielding his divine sword Falchion, he led a revolt and defeated the dark dragon Medeus. Afterwards, Altea was annihilated by King Hardin of Akanea.

Marth (Smash Red)
Marth is a magnificent swordsman. While his swordplay is faster than that of Link, he lacks power, and his quickness is offset by a marginal endurance. His Shield Breaker gains power the longer it's held. The Dancing Blade combination uses both the Control Stick and the B Button to produce a series of up to four attacks.

Marth (Smash Blue)
The tip of Marth's blade causes the most damage, so you should try to create adequate distance between you and your enemy to gracefully strike with that point. Marth's Dolphin Slash is fast and powerful, but it leaves him vulnerable upon landing. Marth uses Counter to block a foe's attack and deal a return strike. If you're fighting a Counter-happy Marth, grab him. 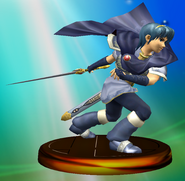