Artwork of Marth from Fire Emblem: New Mystery of the Emblem.

Marth (マルス, Marusu?) is the main playable hero in the first, third, eleventh and twelfth installments of the Fire Emblem series of tactical role-playing games. Previously well-known primarily in Japan for a game series that was never localized abroad, Marth was included in all language versions of Super Smash Bros. Melee as a playable character, and his popularity in the game (along with that of his similar counterpart Roy) influenced Nintendo's decision to release all subsequent Fire Emblem titles internationally.

The Falchion's sister weapon is the Fire Emblem or the Shield of Seals. Both were forged from the fangs of the Holy Dragon, Naga. However, they do not have to be used together, as Marth's ancestor Anri used the Falchion alone. Marth and Chrom have wielded the two weapons together in the Fire Emblem games. 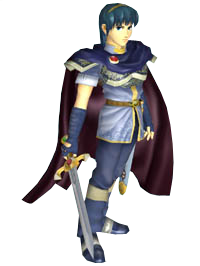 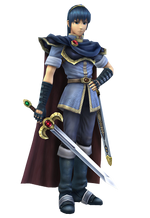 Marth is returning as a veteran for Super Smash Bros. for Nintendo 3DS and Wii U with a redesign leaning towards his appearance in Fire Emblem: Shadow Dragon.

Retrieved from "https://supersmashbros.fandom.com/wiki/Marth?oldid=475013"
Community content is available under CC-BY-SA unless otherwise noted.