Fire Emblem: Shadow Dragons and the Blade of Light (1990)

Marth (マルス, Marusu?) is the main playable hero in the first, third and eleventh installments of the Fire Emblem series of tactical role-playing games. Previously well-known primarily in Japan for a game series that was never localized abroad, Marth was included in all language versions of Super Smash Bros. Melee as a playable character, and his popularity in the game (along with that of his similar counterpart Roy) influenced Nintendo's decision to release all subsequent Fire Emblem titles internationally.

The first game in what would become the long-running tactical role-playing medieval high fantasy series Fire Emblem, released on the Japanese NES (Famicom) and titled Fire Emblem: Shadow Dragons and the Blade of Light (Ankoku Ryuu to Hikari no Tsurugi), introduced Marth as the main character. His design was noticeably different from his modern-day incarnation. The second game in the series, Fire Emblem Gaiden, took place on the same fictional world but on a different continent and was only tangentially related to the first and did not feature Marth. The third game however, titled Fire Emblem: Monsho no Nazo ("Secret of the Crest") and released on Super NES (Super Famicom) early in 1994, was both a remake of the original game and a continuation of that game's story. Marth underwent a character redesign to resemble the more "bishounen" prince he is portrayed as in today's modern image of him, and he became the only FE -series main character to feature in a starring role from the start of the game in more than one FE title. In both these games, his in-game unit is the only one that belongs to the Lord character class, and that became tradition with all main starring characters of subsequent FE titles, being units that must be kept alive and start out weak but become very powerful over the course of each game.

The Falchion is Marth's sword. It remains his only weapon through his two appearances in the Smash Bros. series, and is Fire Emblem's "icon" for both Melee and Brawl. All of Marth's attacks use The Falcion with the exception of grabs and throws.

In the games, the Falchion appears to be a golden broadsword during in-game battle sequences. However, its has been shown as a longsword with a steadily widening blade in its official artwork. A Falchion has also been used by Alm and Sigurd's Tyrfing sword greatly resembles the Falcion. It is extremely effective against dragons in all its appearances and vital to killing Earth Dragons and Dark Dragons.

The Falchion's sister weapon is the Fire Emblem or the Shield of Seals and they were both created together by the Dragon God Naga from his fangs. However they do not have to be used together as Marth's ancestor Anri uses the Falchion alone. Marth wields the two weapons together in the Fire Emblem games.

The Falchion has a property no other weapon has: attacks are stronger if landed at the tip of the blade, which acts as a sweetspot. Successful use of this is the crux of Marth's success. 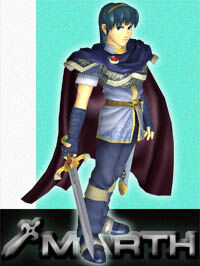 Marth makes his Smash-series debut (and by extent, his altogether North American debut) as an unlockable character in Melee. He can be unlocked one of three ways: using all fourteen starter characters at least once each in Vs. Mode matches, beating Classic mode with all fourteen starter characters on any difficulty, or playing 400 Vs. mode matches. In each of these cases, after fulfilling the conditions Marth must be battled one-on-one to be unlocked.

Many would instinctively agree that Marth is the game's most effective fighter and the best character for use in the competitive meta-game. Pros include the long reach of his sword attacks and the very good damage and knockback specs of the "sweet spot" on the tip of his blade, very high priority, his moderately fast dash, long grab, usefully floaty wavedash, excellent edgeguarding capabilities, easy and efficient combos, and great SHFFL, with main cons being his lack of a projectile attack and laggy up-B recovery. Marth's clone, Roy, has attacks that are almost identical in appearance, and many "Marth vs. Roy" debates ensued in the years following Melee's release but professional analysis places Marth in a higher tier than Roy because he lacks Marth's subtle but vital advantages.

All of Marth's B and A moves involve him using his sword, the Falchion.

By tradition, Marth as a playable character is featured on his personal three trophies. His normal trophy is acquired by beating the Classic mode with Marth on any difficulty, and his Smash Red and Smash Blue trophies are acquired the same way by beating the Adventure and All-Star modes, respectively.

The text of his Classic mode trophy reads: 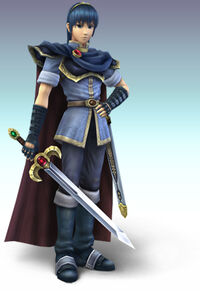 Marth returns as an unlockable playable character. Marth has superior range to most characters in the game, and relies on the length of his sword to effectively zone against his opponents. But this time however, it is uncertain as to whether or not he has been nerfed since Melee like a lot of other Higher Tier characters. He is currently resting in the "A Tier" according to the official SBR tier list. He has one of the highest chances of tripping in-game.