Official artwork of Marth from Fire Emblem: New Mystery of the Emblem.

Hikaru Midorikawa
Marth (マルス, Marusu?) is the main playable hero in the first, third, eleventh and twelfth installments of the Fire Emblem series. He was introduced in Super Smash Bros. Melee, and appears in all of its subsequent games.

Marth uses Falchion in all his moveset except his pummel and throws.

In an interview from the 25th Anniversary of the Fire Emblem series, Masahiro Sakurai stated that he actually wanted Marth in the game as a Link's clone, but he did not have the time to implement his character during development as he barely had time to develop the other features already included in the final release.

Marth
The betrayed prince of the Kingdom of Altea, the blood of the hero Anri flows in Marth's veins. He was forced into exile when the kingdom of Dolua invaded Altea. Then, wielding his divine sword Falchion, he led a revolt and defeated the dark dragon Medeus. Afterwards, Altea was annihilated by King Hardin of Akanea.

Marth [Smash]
Marth is a magnificent swordsman. While his swordplay is faster than that of Link, he lacks power, and his quickness is offset by a marginal endurance. His Shield Breaker gains power the longer it's held. The Dancing Blade combination uses both the Control Stick and the B Button to produce a series of up to four attacks.

Marth [Smash]
The tip of Marth's blade causes the most damage, so you should try to create adequate distance between you and your enemy to gracefully strike with that point. Marth's Dolphin Slash is fast and powerful, but it leaves him vulnerable upon landing. Marth uses Counter to block a foe's attack and deal a return strike. If you're fighting a Counter-happy Marth, grab him. 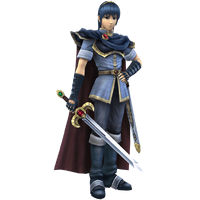 Marth returns as an unlockable playable character. Marth has superior range to most characters in the game, and relies on the length of his sword to effectively zone against his opponents. But this time however, it is uncertain as to whether or not he has been nerfed since Melee like a lot of other higher tier characters. He is currently resting in the "A Tier" according to the official SBR tier list.

Marth
The prince of Altea, in whose veins the blood of heroes runs. He and a small group of stalwarts fought to free Altea after it was invaded by the kingdom of Doluna and the dark dragon, Medeus. With his divine sword, Falchion, he fought and defeated Medeus. However, Altea was then invaded by King Hardin of Akaneia and eventually destroyed. 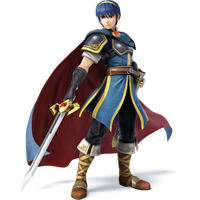 Marth once again returns as a playable character in Super Smash Bros. for Nintendo 3DS and Wii U. Marth is now a starter character, as opposed to being an unlockable character as he was in Melee and Brawl. His design has been visually updated to closely match his attire from Fire Emblem: New Mystery of the Emblem, Heroes of Light and Shadow.

Marth
The first hero from the Fire Emblem series, Marth is the prince of Altea and descendant of the hero Anri. In Smash Bros., he's known as an exceptional swordfighter, swinging his blade with grace. Striking with the tip will maximize the damage dealt. Teach aggressive foes a lesson with his strong Counter move.

Marth (Alt.)
Marth's side special Dancing Blade is a four-stage attack. Aim and time your strikes carefully! The tip of his sword does the most damage. For his up smash, Justice Sword, he thrusts his blade into the air. You can use it to block attacks from above and launch nearby foes.