Marshadow (マーシャドー, Marshadow? Marshadow in Japan) is one of the Pokémon that is set to appear from a Poké Ball in Super Smash Bros. Ultimate.

When Marshadow is summoned, it will use Spectral Thief where it will disappear in a puff of smoke. Marshadow will then start stalking the opponent‘s shadow on the ground until it strikes, confusing the opponent dealing 12% of damage and attacking with a follow up punch dealing 27% of damage.

Marshadow is a Fighting/Ghost type mythical Pokémon that was first introduced in Generation VII. It’s first appearance was in Pokémon Sun and Moon as a event exclusive Pokémon. 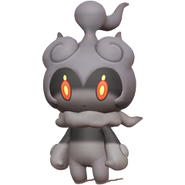 Marshadow’s model in Pokémon Sun and Moon.
Add a photo to this gallery
Retrieved from "https://supersmashbros.fandom.com/wiki/Marshadow?oldid=569035"
Community content is available under CC-BY-SA unless otherwise noted.