In Super Smash Bros. Brawl, Mario's Down B has been replaced with F.L.U.D.D.. In the DOJO!! update revealing this change, a screenshot of the Mario Tornado is shown with the accompanying caption: "He still seems to have this move, though. Eh? Is it a normal attack?!" The E For All demo eventually revealed that the Mario Tornado was, in fact, merged with Mario's old Down Aerial move. The attack is quicker, but the damage is actually unchanged. In fact, it has been discovered to be an effective KO move when used in midair, if the opponent is hit at the very end of the tornado. Because of it being an aerial attack, it does not affect Mario's falling speed, but it can slightly stop his momentum when he is knocked into the air. As a Down Aerial, one must be careful not to fast-fall while using it. It is also the only Down Special Move to be completely replaced by another move as of Brawl. 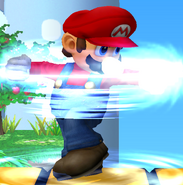 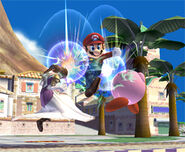 The Mario Tornado as a Down Aerial Attack in Super Smash Bros. Brawl.
Add a photo to this gallery

Dr. Tornado is Dr. Mario's Down Special Move in Super Smash Bros. Melee and Super Smash Bros. for Nintendo 3DS and Wii U. Dr. Tornado has the same effect as the Mario Tornado, except that it is a little stronger. It traps the victim into a tornado, punches them constantly, and then launches them up into the air when the move is done. The attack can also very lightly pull someone near into the Tornado. Unlike Mario Tornado, Dr. Tornado throws them in a random direction, rather than straight up. Dr. Mario is able to hover in the air when using this attack, by holding the B Button while using it. Also, Dr. Mario doesn't yell "Yahoo!" or "Yee-haw!" when performing the attack, unlike Mario, but for some reason, the "Yee-haw!" effect can still be heard as one of Dr. Mario's sounds in the Sound Test menu and when he uses his back to a tornado.

In Wii U/3DS, the move has some minor differences. It has a faster startup and lasts longer, and is harder to escape from, but also has greater ending lag.

Dr. Tornado in Super Smash Bros. Melee
Add a photo to this gallery

Soaring Tornado is one of Dr. Tornado's customizations in Super Smash Bros. 3DS/Wii U. Much like Luigi's Mach Cyclone, Dr. Mario can push opponents and rise higher in the sky, but cannot go very far horizontally.

Clothesline Tornado is Dr. Tornado's other customization. Like Luigi's similarly named Clothesline Cyclone, Dr. Mario has much more launching power, but takes longer to start up.

Clothesline Tornado
Add a photo to this gallery

Mario has used spinning as a main attack method ever since Super Mario Bros. 3, where if he was Raccoon Mario, he could spin and use his tail as a short ranged melee attack. The Mario Tornado is probably based on the Spin Jump that originated in Super Mario World. When the player presses the A button in that game, Mario will spin around and jump, which would bounce harmlessly off certain enemies, kill some that usually require more than one hit and break certain blocks (if he is Super Mario).

Additionally, if he had his Cape, he would be able to spin his cape around, which could damage certain enemies and break blocks, and if Mario did the Spin Jump while running with the cape, he would fly upwards while spinning (depending on how long the player held down the button). However, unlike normal flight, he can't glide afterwards. When equipped with a Fire Flower, he would shoot fireballs while spinning. This move was also used to dismount Yoshi. Spinning has been one of Mario's signature moves since then. In Super Mario 64, Mario could spin similarly to Mario Tornado, but it was used to slow down his descent instead of jumping, and could not be achieved under normal circumstances. Mario was also capable of spinning rapidly in Super Mario Sunshine, although this game post-dates the first appearance of the Mario Tornado in Super Smash Bros.

In a more recent game, Super Mario Galaxy, Mario also has a spinning attack similar to this; it also gives him a short boost in height. The spin jump retains the same use for Super Mario Galaxy 2. More recently, the Spin Jump from Super Mario World has reappeared in New Super Mario Bros. Wii. Many of its functions, such as breaking blocks and defeating stronger enemies, have been replaced with the Ground Pound, and instead, spinning is used to clear away fog, activate certain stage elements, and gain more height when landing on an enemy.