The stage takes place on the top of a planet, meaning you can walk off stage by going too far to the sides. Because the gravitation in the centre always pulls you to the middle, your characters will fall down towards the core. The stage also has two platforms. In the background is the blue house, a few trees and a path leading to the foreground, where some flower beds and tree trunks can be seen. In the background are some other planets, but most notably are the Mario Starship steered by Lubba, and Bowser Jr.'s airship.

The Gateway Galaxy is one of the many galaxies from Super Mario Galaxy for the Wii. It serves as the opening level for the game. This is the first galaxy that is visited in the game and after Mario clears the first level in the galaxy, he won't be able to return here until he unlocks the Gate later on in the game. In the background (like Bowser's Star Reactor later on in the game), there are inaccessible Airships. If the player uses a flight hack and flies towards the ships, he or she will find the Airships are solid, but have no gravity. However, the camera is very glitchy while Mario or Luigi stands on the ships.

The Final Destination version of the stage. 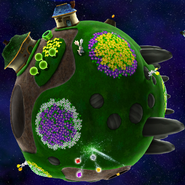 The Omega form of Mario Galaxy.