Announced at E3 2001, Mario (マリオ, Mario) is a starter character in Super Smash Bros. Melee. Mario debuted in Donkey Kong on the arcade, and has been considered the main video game mascot for Nintendo ever since. His design is based on Super Mario 64.

Mario currently ranks 15th place in the tier list, because of being considered an "all-around" character. He is well-balanced, possessing average power in most of his attacks. However, his predictable recovery and above-average match-ups lock him in the E Tier. 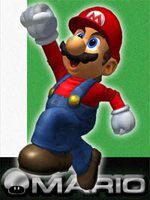 In almost all of the games Mario is in, he is very balanced, and Super Smash Bros. Melee is no exception. Mario is well-rounded in terms of weight, falling speed, air speed, size, and dash speed. Mario's smash attacks do decent damage, and he can rack up damage by easily comboing his opponents. On the downside, most of Mario's KOs require a setup, and he does not have a reliable finisher. Mario has a decent edgeguarding projectile in the Fireball, which is very useful for setting up approaches, but this is his only ranged move.

Mario's Up and Down Throws can be used to chaingrab fast fallers and a few other characters, and his Back Throw can hit groups of opponents. His Forward Aerial is a powerful, but slow Meteor Smash. Mario can also wall jump, and he has good juggling abilities. Mario's recovery is very poor in comparison to other fighters', but his Cape, in addition to being able to turn opponents around and reflect projectiles, can help this problem. Alongside Luigi and Dr. Mario, he has one of the strongest Back Throws, and he can accompany it by edge-hogging for a quick gimp KO.

Mario has been buffed from Smash 64. Here are some changes:

Mario grows to a super size, as if taking a Super Mushroom power-up, before shrinking again. It is the second longest taunt in Melee.

In addition to the normal trophy about Mario as a character, there are two trophies about him as a fighter, unlocked by completing the Adventure and All-Star modes respectively with Mario on any difficulty.

Mario
Known worldwide as Mr. Nintendo, Mario uses his incredible jumping ability to thwart the evil Bowser time after time. While he's best known as a hero, Mario has played many roles, including racer, doctor, golfer, and villain. His tastes have changed over 20 years of gaming; he long ago swapped the colors of his shirt and overalls.

Mario (Smash Red)
Mario is a character without any glaring weaknesses and plenty of strong attacks: he's even equipped with a Meteor Smash. He's a straightforward character who'll reflect the actual skills of the player. Mario's Cape will turn other characters in the opposite direction and can also reflect missile weapons.

Mario (Smash Blue)
Mass determines how easily a character can be sent flying, as well as a character's physical strength: Mario's mass is the standard upon which other Smash fighters are measured. His Super Jump Punch sends foes skyward in a shower of coins, while the Mario Tornado pulls in nearby foes, spins them silly, and scatters them every which way.

Retrieved from "https://supersmashbros.fandom.com/wiki/Mario_(Super_Smash_Bros._Melee)?oldid=577637"
Community content is available under CC-BY-SA unless otherwise noted.