The attack Marill uses is Double Slap. Marill will run around the stage and slap anyone who is in its way. Any character who makes contact with Marill will take damage and get pushed back. Marill often falls off the edge of the stage while it's running. If Marill comes across a wall, it will turn around and continue to attack. If Marill is trapped in an enclosed space (Like between the houses in Onett), it will continue to run back and forth until it disappears. Marill can be KO'd by other characters (including the summoner). Nothing is rewarded for doing this though. Marill's attack does not harm the summoner.

Marill features as a collectible trophy, unlocked as one of the 100+ trophies that can be collected randomly during normal play, such as in the Trophy Lottery and throughout the various Single-player Regular Matches. It reads as follows:

Marill
This Aqua Mouse Pokémon evolves into Azumarill. The round ball on the end of its tail acts like a flotation device, so it can float safely in the roughest of water conditions. It resides on Mt. Mortar in seclusion: few of the creatures are ever seen. Marill's cuteness has earned it a large and loyal fan base. (Pokemon Gold & Silver 10/10) 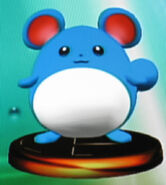