Very Rare
Manaphy (マナフィ, Manafi) is a fictional creature from the Pokémon franchise.

In Super Smash Bros. Brawl, Manaphy appears from its Poké Ball and uses Heart Swap, its signature move, temporarily swapping the players bodies. During the heart swap, the player keeps their own damage and lives, if a Pokéball is summoned, it will continue to attack its target, even after the Heart Swap ends, and a self-destruct causes the player to lose a life rather than the opponent. Two players need to be close to Manaphy in order for the Heart Swap to take effect. This is the rarest of all Pokémon to appear in the game except for Mew, Celebi, and Jirachi, who appear 1/493 of the time and drop collectibles.

The Permanent Heart Swap glitch is a glitch in Brawl that causes the effects of Manaphy's Heart Swap to last for the entirety of the player's stock. If a player under the effects of Heart Swap is KO'd and has no stock remaining, the player they switched characters with will be forced to remain as that character. Once the second player is KO'd, they will reappear as their original character.

A Seafaring Pokémon. Eighty percent of its body is made of water. It has the ability Hydration, which allows it to heal status effects at the end of a turn if it's raining. It is the only Pokémon that can use the stat-effect-swapping move called Heart Swap. Place a Manaphy and a Ditto in a Pokémon Day Care, and they will produce an Egg that contains a Phione.

Manaphy appears as a cause to a stage hazard in Kalos Pokémon League. Manaphy uses Whirlpool that will cause the middle platform to work as a flush, pulling opponents to the Lower Lower Blast line.

This Water-type Pokémon is said to have the mysterious ability to bond with any other Pokémon. It's also said to appear occasionally in the Water-type Elite Four Trainer's room in the Kalos Pokémon League stage. When it appears on the stage, it'll use its Whirlpool move to drag fighters into the middle of the swirling waters.

Manaphy appears as a Support Spirit. 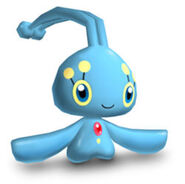 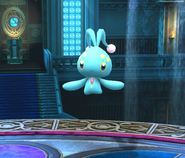 Manaphy in Super Smash Bros. for Wii U 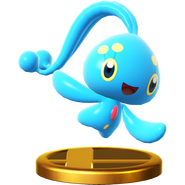 Manaphy's Trophy in Super Smash Bros. for Wii U
Community content is available under CC-BY-SA unless otherwise noted.
Advertisement