Smashpedia
Register
Don't have an account?
Sign In
Advertisement
in: Event Matches (SSBM), The Legend of Zelda universe, Mii Costumes,
and 9 more

The Majora's Mask is an ancient artifact originally used by an ancient tribe for bewitching rituals. However, because the Mask possesses such immense magic power, it was sealed away to prevent a great calamity. Years and years later, the Mask is somehow acquired by the Happy Mask Salesman, which gets stolen by the Skull Kid. Upon wearing it, the Mask unleashes a powerful magic that creates its own version of Termina based on the memories and imagination of the Skull Kid, who's own internal sadness is said to have amplified the Mask's magic power. The Skull Kid starts to regularly wear the Mask; however, unbeknownst to him, it is slowly beginning to take control of his mind, turning his once harmless pranks into ones with malicious intent. After Young Link's initial encounter with the Skull Kid and reversing time back by three days, the Happy Mask Salesman implores him to retrieve the Mask before the Skull Kid can bring about the apocalypse by dropping the Moon on Termina.

After inheriting even greater magic power from the Mask, the Skull Kid imprisons the Four Giants within their respective temples; with the regions now without their guardians and their temples tainted, Termina begins to suffer from enormous disasters. Eventually, Young Link frees the Giants from their confinements and faces off against the Skull Kid again on the Final Day atop the Clock Tower, though now he performs the Oath to Order and have the Four Giants stop the Moon, knocking the Skull Kid unconscious in the process. The Majora's Mask frees itself from its host and flies up into the Moon, with Young Link and the fairy Tatl in pursuit for the final battle. The ensuing boss fight is split into three stages, where the Mask will take on a different form after being beaten. Its first form is simply the Mask floating, but now with grown hairlike tentacles; this is then followed by Majora's Incarnation, where the Mask begins to grow arms and legs and starts dancing to taunt Link; following this is the third and final form, Majora's Wrath, where it grows into a more humanoid figure. Link eventually prevails against the Mask, where its monstrous form disintegrates into ashes and the Mask loses its sentience.

In the aftermath from the Majora Mask's defeat and the Moon returning to its orbit, Link meets up with the Four Giants, the Happy Mask Salesman, and the Skull Kid on the outskirts of Termina. The Giants reassure the Skull Kid of their friendship and return to their resting places. The Skull Kid asks Link if they can be friends too, remarking that he smells like the "fairy kid" who taught him "Saria's Song" in the Lost Woods (implying this Skull Kid to be the same one Link first encountered in Ocarina of Time). Young Link departs Termina with Epona, while the Skull Kid and the Fairy siblings celebrate the Carnival of Time. The final scene shows a drawing carved on a tree trunk depicting the Skull Kid with Link, the Fairy siblings, and the Four Giants.

The Majora's Mask appears in Event 47: Trophy Tussle 3, where the Mask itself is a stage. The two horns act as elevated platforms and create an enclosed are on the stage's center, while the spikes on the side are grabbable ledges. To complete the Event, the player must defeat three other opponents (chosen at random) in a Free-For-All match. If the player wins, they will be rewarded with the Majora's Mask trophy.

A lonely Skull Kid put on Majora's Mask and unknowingly allowed a great evil to invade the land of Termina. The mask manifested its evil power into the fearsome looking moon, and the Skull Kid became merely a puppet under its malevolent power. In the ultimate battle with Link, Majora's Mask fought in three separate forms.

Headgear for the Mii Fighters modeled after the Majora's Mask was made available as a part of the Wave 1 batch of DLC costumes.

The Majora's Mask appears as a board item in Smash Tour. If used, it will give the player doubled stats, but will consequently give them 50% damage at the start of a match.

As the Skull Kid is an Assist Trophy, he fittingly wears the Majora's Mask and uses its magic power to create distortions with the camera to the detriment of all the players.

The Majora's Mask trophy is exclusive to the Wii U version. It is unlocked after acquiring 48 non-DLC Headgear pieces.

Created for the most hexing rituals, this mask is infused with such dark magic that it becomes an evil creature in its own right. In a separate dimension called Termina, it tries to cause the end of the world by making the moon fall from the sky. And if you think the mask looks creepy, wait until you see its other forms!

Created for use in ancient hexing rituals, this mask was infused with such dark magic that it became an evil creature in its own right. In a separate dimension called Termina, it tries to cause the end of the world by making the moon fall from the sky. And if you think the mask looks creepy, wait till you see its other forms!

The Majora's Mask Headgear returns, now part of the base game; it can be acquired after clearing the first stage of the true final battle in World of Light without being KO'd as Ganondorf. The Majora's Mask is also a part of the Skull Kid costume, which the headgear piece can be purchased from the store for 450G. 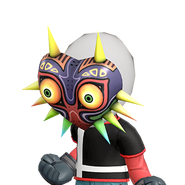 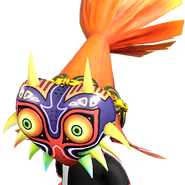 As the Skull Kid returns as an Assist Trophy, so does the Majora's Mask, once again being worn by the Skull Kid and providing him magic abilities.

A Spirit of the Majora's Mask is available in the base game. It is a Support Spirit under the Advanced class. There is no Spirit Battle for the Majora's Mask and instead can only be acquired from purchasing it at Timmy and Tommy's store for 4000SP in World of Light.

The Majora's Mask is also part of the enhanced Skull Kid Spirit after maxing it out to Level 99. It is a Primary Grab Spirit under the Legendary class.