Rare
Lunala (ルナアーラ, Lunala? Runaa'ara in Japan) is one of the Pokémon that is set to appear from a Poké Ball in Super Smash Bros. Ultimate.

Lunala enters its Full Moon phase before taking position in the back of the stage, and shoots characters with Moongeist Beam which consist of firing a large damage-dealing laser at opponents multiple times before flying away. 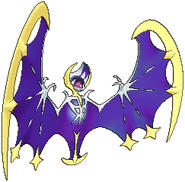