In Super Smash Bros., there are a total of two hits, one at the beginning of the hit, and one at the end when Luigi sends out his hands, which is extremely powerful. The Super Smash Bros. one is in the middle of difficulty between Melee and Brawl and has by far the best power of any of the 3 cyclones. It is usually considered Luigi's other main killing move outside of Fire Jump Punch. It goes diagonally in the air, but it is possible to aim the control stick to only send the cyclone vertical. This takes very quick hand speed as well.

Luigi using the Luigi Cyclone in Super Smash Bros.
Add a photo to this gallery

In Super Smash Bros. Melee, the Luigi Cyclone is the primary vertical recovery as long as someone has very quick tap speed. The player must tap the B button at least 14 times for Luigi to gain the cyclone's full height. There are a total of two hits very similar to the original with one right at the beginning and one when Luigi raises his hands. This version of the cyclone has the best combo ability and very low K.O ability/gimping ability. Unlike in Brawl, the momentum of a jump does not contribute to the performance of the cyclone, so the same height is gained in all situations. However, unlike other games, the Melee cyclone needs to be "charged" by performing it so that the last few frames (when the second set of hitboxes comes out) occur on the ground.

It is also by far the hardest cyclone to do fully, with only people with very fast hand speed being able to do it correctly. It takes around twice the hand speed as a Jumpless Rising Cyclone from Brawl, but the rising cyclone in Melee cannot be performed from the ground. It is also a very quick out of shield move and is a good approaching move but with low priority. It is a primary combo starter vs fast fallers or heavies. In addition, using this move on the ground and hitting left or right on the control stick allows for very rapid horizontal movement, equal in speed to Captain Falcon's full dash. Hence it is tied for the fastest means of ground movement. If B Button is pressed again after the technique is executed on the ground Luigi will hop into the air, which can be useful to combo opponents to a slightly higher damage percentage. When in the air, even if the B button is pressed once instead of mashing it, the charge will be wasted when used in the air unless the cyclone is directed so that Luigi land on a platform at the end or immediately following the attack lag frames.

The cyclone also becomes "charged" immediately when executed on the ground, even if Luigi is knocked out of the animation after only one frame. Thus it can be useful to force a clash when charging it, so as to eliminate the risk of punishment from ending lag. 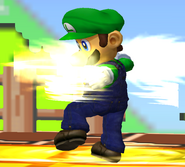 The Luigi Cyclone being used in Super Smash Bros. Melee.
Add a photo to this gallery

In Super Smash Bros. Brawl, the Luigi Cyclone can travel across the stage quickly, has more hits than Melee, less power, and is very good at gimping certain characters. The vertical recovery distance is now much easier to perform than its Melee counterpart. It has less vertical distance than the original, but has the most horizontal distance of all 3 games. Also, the Super Jump Punch has better horizontal distance, allowing Luigi to recover much easier than any other Super Smash Bros. game. The Brawl Cyclone is also one of the better moves Luigi has to approach and bait.

Mach Cyclone is one of Luigi Cyclone's down specials that can be used via customization. It can push enemies away, and though it does not do as much damage it can lift Luigi quite far into the air.

The Mach Cyclone's vertical movement could make up for the lack of vertical movement of Fiery Jump Punch, but the player will need to mash the special attack button very fast in order to make Luigi rise up into the air when he starts the move in the air; on the ground it does this automatically. The last hit launches, but the rest of the move doesn't deal any damage. The move doesn't have much horizontal movement, but this can be remedied if paired with any Green Missile variation.

Clothesline Cyclone is Luigi Cyclone's other customization. This is a slower but more powerful attack which can send opponents flying sideways.

This move has high launch power, so it is good for getting opponents off-stage, but this also prevents all the hits from connecting and racking up more damage. The move also has kill power. It is a slow move, making it bad for recovery and trying to catch opponents that are farther away.

There are a few main techniques using the Cyclone in Brawl.

Retrieved from "https://supersmashbros.fandom.com/wiki/Luigi_Cyclone?oldid=599083"
Community content is available under CC-BY-SA unless otherwise noted.