Luigi (Super Smash Bros. for Nintendo 3DS and Wii U)

Charles Martinet
Luigi (ルイージ, Ruīji?) is starting character who represents the Mario universe in Super Smash Bros. for Nintendo 3DS and Wii U. He was announced as a returning veteran during the Nintendo Direct on August 7, 2013, as part of Nintendo's "Year of Luigi".

Luigi currently ranks 18th on the tier list, an incredible improvement from his 28th position in Brawl, and his best placement in the series to date. Luigi's moveset makes him difficult to punish due to fast attack speed, solid air game, favorable launching angles from the ground, and having fantastic combo potential. However, Luigi retains his slow mobility, low traction, and limited range in attacks.

Luigi is a Half-Grappler kind of character. A good part of his gameplay relies on his Down Throw combos, that, despite being nerfed in recent patches, it is still a force to be feared. His stats aren't as balanced as Mario's, but he is formidable at many things.

Luigi excels at stringing various attacks in the air, and also has very fast ground moves that can combo into each other, making him unstoppable once he starts attacking. Luigi boasts having high jumps and low falling speed, which, allied with his combo potential, makes him very capable of chasing opponents in the air vertically, although his air speed is quite slow, which hinders his ability on horizontal air combat.

His moveset is quite fast on both ground and air. His Tilts are fast and good combo starters, with Up Tilt combo'ing with itself and most notable Up Aerial, while Down Tilt can trip opponents, which can lead to tech chases. His Smash Attacks are fast and powerful in terms of knockback, although his Down Smash is weaker than Mario's. His Dash Attack can be easily punished, but can be useful as a surprise attack. All his Aerials are very fast and auto-cancel in short hops, with Neutral Aerial being a powerful Sex Kick, while Forward and Back Aerial are great at combo'ing with themselves and as gimping tools. Up Aerial is his main juggling move, while his Down Aerial has a powerful Meteor Smash sweetspot.

As for his Special Attacks, Fireball is a very versatile move to space opponents, and even for edgeguard and counter-edgeguard; Green Missile is mainly used for recovery, since can cover a massive horizontal distance when fully charged; if it "misfires", Luigi will deal massive knockback if it hits an opponent; his Super Jump Punch covers more vertical distance than Mario's, but little horizontally, however, it has an extremely powerful hitbox at the very beginning at the move, being a devastating attack that can kill opponents at early 60% to 70%; Luigi Cyclone is another great recovery move, but can also be used as a fast approach and even for KO'ing near the blast line, since its hits can frame trap opponents even after air dodges.

Luigi's trump card, however, lies in his powerful throws. While his grab range is the same as Mario, his grabs are faster and very efficient, with his Down Throw being notable for its low base knockback, allowing Luigi to pull guaranteed follow ups from it until mid-high percentages. Up Throw can also be a good combo starter at low percentages, and Back Throw is a powerful KO move when used near the ledges.

Luigi's flaws, however, lies in his low mobility, which can give him problems to approach, specially against faster characters like Sheik, Sonic and Zero Suit Samus. His lack of range also gives him problems against opponents with disjointed hitboxes, and low traction makes his out of shield options not as useful, since when shield-stunned, he tends to be pushed very far from opponents. Also, while having plenty of options for recovery, his low aerial speed makes him a very easy opponent to gimp.

Overall, Luigi has powerful tools that must be used sparingly, being careful when approaching. The player must be patient and use every opportunity to punish opponents with grabs and strings combos without giving the opponent a fighting chance.

In the transition from Super Smash Bros. Brawl, Luigi has received a mix of buffs and nerfs, with the buffs being greater overall, as his comboing ability and neutral game have been noticeably improved along with being more agile overall. However, he did receive a few nerfs. His recovery was moderately nerfed due to aerial versions of Super Jump Punch and Luigi Cyclone gaining less height. Most of his moves had their power weakened along with dealing less damage.

Aesthetically, Luigi's design is brighter to match his appearance in Mario Kart 8 and Super Mario 3D World. He has also received new animations for some attacks to further increase the difference between him and Mario. Notably, he has more exaggerated expressions to reflect his scared nature. 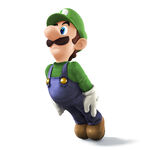 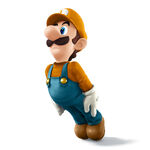 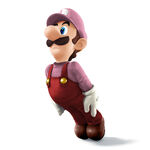 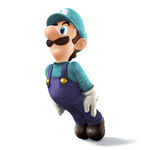 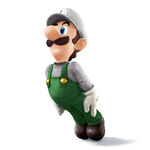 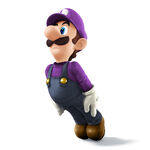 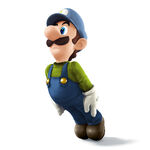 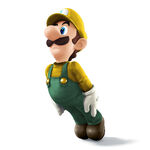 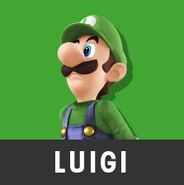 Luigi's artwork for Super Smash Bros. for Nintendo 3DS/Wii U.

Luigi performing an Up Taunt next to Donkey Kong and Bowser.

Luigi performing a jab against Kirby.

Luigi performing an Up Taunt.

Luigi performing a Up Taunt near a Yellow Pikmin sitting on a tree stem.

Luigi in his Super Leaf power-up.

Luigi performing an Up Taunt on a platform. 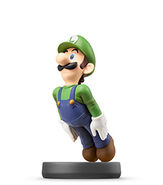 Luigi, Mario, Pit, and Dark Pit are fighting each other.

Luigi amiibo packed inside a box.

Luigi along with Mario.

Luigi with his Poltergust 5000 as his Final Smash.

Luigi along with Bayonetta.