This article is about Luigi's appearance in Super Smash Bros. Melee. For other uses, see Luigi.

Luigi (ルイージ, Luigi) is an unlockable character in Super Smash Bros. Melee. Luigi's moveset is markedly similar to that of Mario, though his attacks often differ in knockback and trajectory.

Like in the original Super Smash Bros., Luigi is a floaty character with a high jump and low traction. As a result of his low traction, Luigi has the longest wavedash in the game, which allows him to slide across the stage in lengthy bursts at speeds nearly as fast as Captain Falcon's dash. Luigi is also well known for his powerful attacks and the hit-or-miss nature of his Super Jump Punch and Green Missile. Luigi has some of the better combos in Melee and due to his floatiness and quick aerials, combos are usually small against him as well. Unlike Luigi's Mansion, which was released shortly prior to Melee, Luigi's look is based more on his appearance in the Nintendo 64 era.

Luigi currently ranks 13th on the tier list, being located in the D tier. While his air game is relatively good (being one of the best in the game), they are hampered by his slow falling speed, which can prevent him from performing true aerial combos. His recovery is also predictable and easy to edge-guard, with his Super Jump Punch gaining no horizontal distance and his Green Missile leaving him vulnerable and can cause him to fly off the stage if he misfires. 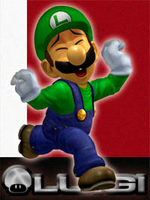 Luigi can be an awkward character to play as. This is because his movement is best on the ground (due to having the longest wavedash in the game), but his attacks are best in midair (due to them being fast and powerful, which allows for high damage combos). Luigi's recovery is normally long, but also slow and predictable, due to Luigi having slow air speed and falling speed. His Side Special Move, the Green Missile, is his only method of horizontal recovery (besides Down B tilting). However, there is a 12.5% chance of the Green Missile misfiring. This can be good in some cases, as it can increase Luigi's recovery distance and speed. However, it can also lead to a self-destruct. Luigi also has the longest distance for wavedashing.

Luigi's high vertical jumping compliments vertical-trajectory ground attacks, but his slow falling speed slows his aerial game. However, one should note that slow falling does have advantages, such as making combos less effective against him. Luigi's approach is exceedingly poor outside of wavedashing (a combination of having low traction, slow initial dash speed, no disjointed hitboxes, slow falling speed, and a rather poor projectile in general), which forces an over-reliance on it for approaching. Luigi's Back Throw has very good knockback, and can be accompanied by edgeguarding on most stages for a quick gimp kill. Although Mario's and Dr. Mario's Back Throws are stronger, all 3 of them can take advantage of this in Mushroom: Kingdom and Mushroom: Kingdom II for an One-Hit KO.

Luigi puts both hands behind his back and does a casual kick against the ground. It is the only taunt in Melee that can damage the opponent, dealing 1% damage. The taunt normally sends the enemy upwards with set knockback, and meteor smashes an enemy hanging on an edge.

In addition to the normal trophy about Luigi as a character, there are two trophies about him as a fighter, unlocked by completing the Adventure and All-Star modes respectively with Luigi on any difficulty.

Luigi
Although Mario's younger brother has always played second fiddle, Luigi finally garnered the spotlight with his very own game, Luigi's Mansion. Things are looking up for the eternal understudy; he's even picked up his own rival in Waluigi. The day he's referred to as the "lean, mean, green machine" may not be too far off.

Luigi (Smash Red)
Luigi has worse traction than his brother, but he's a more powerful jumper. His Fireballs aren't affected by gravity, so they fly straight horizontally. The Green Missile is similar to Pikachu's Skull Bash, but there's a 12.5% chance of a spontaneous misfire. Luigi's taunting pose inflicts minor damage.

Luigi (Smash Blue)
Smack someone with Luigi's Super Jump Punch, and if the timing is just right, it will become a Fire Jump Punch of incredible strength. However, Luigi can only jump straight up when delivering this blow, and if his aim is a bit off, he'll only do a single point of damage. The Luigi Cyclone sucks foes in and twirls them about. 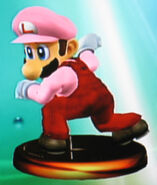 Retrieved from "https://supersmashbros.fandom.com/wiki/Luigi_(Super_Smash_Bros._Melee)?oldid=577634"
Community content is available under CC-BY-SA unless otherwise noted.