Luigi would then once again be featured in the world-famous Super Mario Bros. for the NES, which saw the two brothers traveling through the Mushroom Kingdom for the first to rescue Princess Peach (then called "Princess Toadstool") from the evil Koopa King, Bowser. Here, Luigi was clad in a green shirt, white overalls and white hat compared to his usual green color scheme. In Super Mario Bros. 2 (both the U.S. and Japanese versions) he would be established as actually having a superior jumping ability to Mario, but having worse traction. However, the U.S. version did establish that Luigi was both taller and thinner than his older brother. In Super Mario Bros. 3, Luigi once again looked no different than Mario.

Over the years, while Mario appeared in more and more games, Luigi started taking a back seat to his older brother, even being left out of some games entirely. While he appeared as the sole playable character in Mario is Missing, this was not a "true" Mario title due to its focus on education. The most notable of these was Luigi's complete absence in the world-famous Super Mario 64 which garnered some controversy. He also did not appear in Super Mario Sunshine after that, although he did appear in the Nintendo DS remake of Super Mario 64 as a playable character alongside Yoshi and Wario.

However, he would soon make his first appearance in a fighting game in Super Smash Bros. and following that, earned him the spotlight in his own game, Luigi's Mansion, which launched the GameCube and would later have a sequel on the 3DS called Luigi's Mansion: Dark Moon. Since then, Nintendo has made a more conscious effort to include Luigi in more games, playable or otherwise; he starred alongside Mario in the Mario and Luigi games for the Game Boy Advance and Nintendo DS, and was a playable character in Super Paper Mario (after appearing as a non-playable character in the previous two Paper Mario games). He has even been made into a playable character in Super Mario Galaxy after the game is beaten as Mario. In Super Mario Galaxy 2, he makes a playable appearance by temporarily replacing Mario for the duration of certain levels. Also in 2013, Nintendo decided to make it the "Year of Luigi". Additionally, in October of 2019, he got the spotlight once again with Luigi's Mansion 3 for the Nintendo Switch.

Things have since been looking up for Luigi, and while he is less famous than Mario, he is a popular character among gamers and may still be called the lean, green, mean machine in the future.

Luigi's abilities are almost identical to Mario's, but with a few differences. His Neutral Special Move is also a Fireball, except colored green rather than red, and is not affected by gravity like Mario's, so it floats in the air. His Up Special Move is also an uppercut called the Super Jump Punch, but it does only 1% damage if the hit is indirect. If the hit is direct, it can do up to 25% damage. His Down Special Move is called the Luigi Cyclone, which is similar to the Mario Tornado, but it sends the opponent flying away from Luigi almost straight up; as such, it is often used as a combo finisher. Luigi's taunt is also the only taunt that can damage opponents.

One thing that is not known about Luigi in Super Smash Bros is that he is one of the two characters that have three recovery jumps (the other being Mario): his midair jump, the Up B and then the Down B. When getting back to the stage, double jump and after using it, press Down B and press B as quickly as possible. This sends Luigi in an upwards direction and gives him a quick second hover, allowing for the Up B to be used.

Due to his overall awkward physics, Luigi was placed on the bottom of the Tier List, making him the lowest ranked unlockable character.

Though often hidden in his older brother Mario's shadow, Luigi, is in reality, very popular. Taller than Mario, Luigi also jumps higher. Although he didn't appear in Super Mario 64, in Mario Kart 64 he performed to the best of his ability. For one who always seems to be in the background, he has many fans who eagerly await his appearance.

Luigi returns in Super Smash Bros. Melee as a secret character. He can be unlocked in the adventure game by finishing the first stage with the number "two" in the timer, which will cause Luigi to take Mario's place in the subsequent battle, or by playing 800 VS. matches. Finishing the first stage with the number "two" in the timer may be a reference to the fact that Luigi has always been considered second to Mario. Like every veteran, Luigi was given a unique ability, the Green Missile. Luigi charges up, and when this is finished, launches himself forward as though he were a missile (hence the title). This can be used as a recovery move along with his Up B, Super Jump Punch. He also has many all-new Normal Moves. He was placed 13th on the tier list, somewhat of an improvement over his previous position in the first game, being two spaces higher than Mario.

By tradition, Luigi as a playable character is featured on his three personal trophies. His normal trophy is acquired by beating the Classic mode with Luigi on any difficulty, and his Smash Red and Smash Blue trophies are acquired the same way by beating the Adventure and All-Star modes, respectively.

Luigi
Although Mario's younger brother has always played second fiddle, Luigi finally garnered the spotlight with his very own game, Luigi's Mansion. Things are looking up for the eternal understudy; he's even picked up his own rival in Waluigi. The day he's referred to as the "lean, mean, green machine" may not be too far off.

Luigi [Smash]
Luigi has worse traction than his brother, but he's a more powerful jumper. His Fireballs aren't affected by gravity, so they fly straight horizontally. The Green Missile is similar to Pikachu's Skull Bash, but there's a 12.5% chance of a spontaneous misfire. Luigi's taunting pose inflicts minor damage.

Luigi [Smash]
Smack someone with Luigi's Super Jump Punch, and if the timing is just right, it will become a Fire Jump Punch of incredible strength. However, Luigi can only jump straight up when delivering this blow, and if his aim is a bit off, he'll only do a single point of damage. The Luigi Cyclone sucks foes in and twirls them about.

Vacuum Luigi
In a strange twist of fate, Luigi wins a huge mansion in a contest he didn't even enter, and the place turns out to be haunted! After meeting a weird professor named Elvin Gadd, Luigi enters the place armed with a flashlight and a ghost-sucking vacuum cleaner. Mario's trapped somewhere in there! Can Luigi save him? 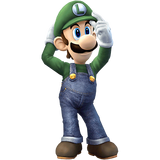 Luigi is once again an unlockable character and can be unlocked by playing 22 vs matches, completing Classic Mode, or by getting Luigi to join the party in The Subspace Emissary. Luigi received a major update to better differentiate him from Mario, such as his redesign based off of Luigi's Mansion, and having his distinctive voice from the Mario series.

Luigi received a new Final Smash named Negative Zone, in which he dances while projecting a void, which creates a number of random effects for those caught within. While the concept of the Final Smash is original, it may be referenced to being overshadowed by Mario. He placed 28th in the tier list, being three spaces higher than his brother.

Luigi has a trophy that is awarded each time the Classic mode is completed with Luigi on any difficulty.

Luigi
Mario's younger twin brother. He's shy and quiet and overshadowed by his sibling, but he's actually quite talented. His jumping ability surpasses Mario's, and his all-around skills let him overcome any problem. He's a bit cowardly and really afraid of ghosts. Even so, in Luigi's Mansion, he was charged with cleaning up a whole house full of spirits.
Paper Luigi
The legendary hero Mario's younger brother. He's teased by Koopas and Goombas alike and is sometimes called "green mustache guy." He goes missing after Bowser and Peach's wedding. He's known for his jumping prowess--his special move is the High Jump. It's said that he has a close relationship to the masked man brainwashed by Count Bleck and known only as "Mister L." 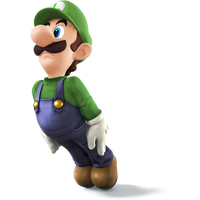 Luigi returns as a playable character in Super Smash Bros. for Nintendo 3DS and Wii U, being the second character after Captain Olimar to be confirmed following the E3 2013 event. This game marks the first time in the Smash Bros. series where Luigi is confirmed before the game's release and is a starter character. Like Mario, his design is based off his appearance from recent Mario games such as Super Mario 3D Land and Super Mario 3D World. Additionally, Luigi has a new Final Smash known as Poltergust 5000, which is an attack where Luigi uses the Poltergust 5000 from Luigi's Mansion: Dark Moon and vacuums nearby enemies before launching them away. He placed 18th in the tier list, being 9 spaces lower than Mario.

Luigi
Luigi recently celebrated his 30th anniversary with the Year of Luigi, but all that attention just made him even more shy and awkward. In Smash Bros. (as in life), Luigi tends to follow his brother's lead, but he adds his own flair to moves like Super Jump Punch. His taunts, however, are 100% Weegee.

Luigi (Alt.)
Luigi may sulk when his down taunt is used, but his little dejected kick can actually hurt a nearby enemy fighter. It can even trigger a meteor smash! Notice an enemy leisurely hanging from the edge? Run over and pout on the edge—that foe will be the one with something to pout about!

Luigi (With Poltergust 3000)
Luigi's trusty tool, the Poltergust 3000. This isn't your neighbor's boring, old vacuum—the Poltergust 3000 sucks up ghosts! It also can find them when they are hiding and can blow them around a room! Why doesn't every family own one of these, I wonder...

Tanooki Mario & Kitsune Luigi
If you find a Super Leaf, Mario transforms into Tanooki Mario! His newfound tail works as a weapon and as a propeller to slow his fall. His brother, Luigi, won't turn into a Tanooki, though—he becomes Kitsune Luigi. Wouldn't want to have trouble telling the two apart, would we?

Paper Luigi
Paper Luigi is Paper Mario's younger brother. He shows up from time to time during Paper Mario's quest for the Royal Stickers, but he doesn't stick around for long. Such a modest guy... I wonder what he's getting up to now!

Baby Luigi
Despite missing the trademark mustache, the big nose and the L on his cap should be dead giveaways that this is Luigi! When he appeared in Mario Kart: Double Dash!!, Baby Luigi surprised the other racers with his Rattle Buggy driving skills. Adult Luigi probably still remembers those days of racing glory.

Mr. L
He calls himself the Green Thunder, but Mr. L's true identity is a mystery, forever concealed beneath his stylish green hat. With his incredible skill of jumping really high, he makes a valuable addition to Count Bleck's evil forces. Coincidentally, for the whole of Mr. L's reign of terror, Luigi is nowhere to be seen. How odd...

The English Wikipedia has an article on Luigi. Based on the article's quality, it can or can not be used to improve this article.

Retrieved from "https://supersmashbros.fandom.com/wiki/Luigi?oldid=589316"
Community content is available under CC-BY-SA unless otherwise noted.