Lugia (ルギア, Rugia) is a fictional creature in the Pokémon media franchise.

Lugia uses Aeroblast as its attack. When summoned, Lugia will remain on the screen for a few seconds and then fly off the screen to the background of the stage (similar to the movement of Ho-oh). Lugia will release an Aeroblast that will travel around the stage. Any character that makes contact with the blast will take heavy damage and will be OHKO'd. Any character that makes contact with Lugia while it's remaining on the stage will take damage and will be knockbacked rather far, similar to Moltres, but not quite as strong. Lugia is a legendary Pokémon, so its appearance out of a Poké Ball is rare. The chance of Lugia appearing out of a Poké Ball is doubled when the event match Legendary Pokémon is played. Lugia's attack does not harm the summoner. Lugia is arguably the best Pokémon in Melee as touching it KOs under 100%, its aeroblast OHKOs, and it covers a very large area (it's more than twice the size of Moltres). It is also possible for Lugia to KO the same opponent twice, but a wise player would stay on the revival platform if they got KO'd touching it.

Lugia features as a collectible trophy, unlocked as one of the 100+ trophies that can be collected randomly during normal play, such as in the Trophy Lottery and throughout the various Single-player Regular Matches. It reads as follows:

Lugia:
The waters of the Whirl Islands are home to this legendary Pokemon, whom few have seen. Lugia lives quietly in the deepest ocean trenches for one very good reason: its combined aerial and psychic powers are so strong as to be extremely dangerous. The special moves of this gargantuan creature include the destructive wind assault known as Aeroblast. (Pokemon Gold & Silver 10/10)

Lugia reprises its role from Super Smash Bros. Melee. When it emerges from its Poké Ball, it flies into the background and uses Aeroblast as it did in previous game, but it is now more graphicallly detailed. Lugia was changed in Super Smash Bros. Brawl, as Aeroblast still invariably One-Hit KOs, but in one hit, without trapping the characters and inflicting much less damage; it also covers a smaller area. However, Aeroblast is a very powerful OHKO and touching Lugia's body KOs light characters as low as 35%; multiple hits chaining can result in a OHKO. Despite the hitbox reduction, it is still arguably one of the strongest Pokémon in the game.

Lugia can be found randomly during normal play.

As a Trophy
A Diving Pokémon. A legendary Pokémon often referred to as "guardian of the seas," it has the impressive ability to control the wind. Lugia typically spends its time quietly at the bottom of the ocean. Highly powerful in all areas, Lugia's Aeroblast move is especially powerful. It uses strong flapping of its wings to target damage on a foe's weak spot.

In Super Smash Bros. Wii U and 3DS

Lugia returns once again by using its signature move Aeroblast once summoned. Lugia can also appear from a Master Ball due to its Legendary Pokémon status.

Despite being a Psychic/Flying-type Pokemon, Lugia sleeps on the ocean floor. Legend says the flapping of Lugia's wings can create storms that last up to 40 days. It's impossible to know for sure, but in Smash Bros., Lugia definitely brings a storm with its Aeroblast attack. 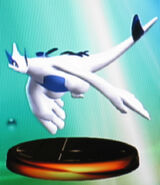 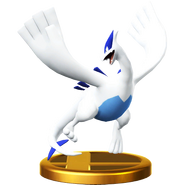 Lugia's Trophy in Super Smash Bros. for Wii U.
Add a photo to this gallery
Retrieved from "https://supersmashbros.fandom.com/wiki/Lugia?oldid=591055"
Community content is available under CC-BY-SA unless otherwise noted.