This article is about Lucina's appearance in Super Smash Bros. for Nintendo 3DS and Wii U. For other uses, see Lucina. Also, for information about the character of whom Lucina is a clone, see Marth (SSBWU/3DS).

Lucina is a character from the Fire Emblem series, specifically Fire Emblem: Awakening. She is playable in Super Smash Bros. for Nintendo 3DS / Wii U as an unlockable character.

After completing either option, you must fight and defeat Lucina on Arena Ferox

Afterwards, you must fight and defeat Lucina on Coliseum.

Lucina has been described as being a clone character of Marth, similarly to how Roy was in Melee. The main difference is that she doesn't have Marth's "strong sword tip" ability, making her attacks less damage-fluctuant.

While being a full clone, they do have small differences, mostly in some move properties as well few animations.

Chrom's daughter and the future Princess of Ylisse. When she arrives from a doomed future seeking to prevent it from ever happening, she goes by the name Marth before her identity is revealed. She fights much like her adopted namesake, but her entire blade is equally powerful instead of having a more powerful tip.

Lucina's moves are much like Marth's, but there are subtle differences. With Marth, you need to try to hit with the tip of his sword, but Lucina's sword is equally powerful all along the blade. Her Shield Breaker move lets her attack opponents and break their shields at the same time. Charge it fully to shatter shields in one hit.

Lucina has the mark of Naga in her left eye. 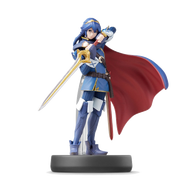 Lucina's Amiibo figure.
Add a photo to this gallery

Retrieved from "https://supersmashbros.fandom.com/wiki/Lucina_(Super_Smash_Bros._for_Nintendo_3DS_and_Wii_U)?oldid=494884"
Community content is available under CC-BY-SA unless otherwise noted.