Yuu Kobayashi
Lucina (ルキナ, Rukina?) is the future daughter of Chrom that made her debut as one of the three main characters in Fire Emblem Awakening. She appears as a playable character in Super Smash Bros. for Nintendo 3DS and Wii U and Super Smash Bros. Ultimate.

Lucina is a princess of the kingdom of Ylisse, the successor state to the now-ancient kingdom of Archanea, and is Chrom's daughter. She bears the holy bloodline of Ylisse's rulers, the Exalts, who carry the power of the legendary dragon Naga and her holy gifts to humanity: the Fire Emblem and the blade Falchion; this power is signified by the presence of a distinctive Brand on their bodies, with Lucina's being located in the iris of her left eye.

The adult Lucina the game primarily features is a time-traveler from an alternate future, who travels back to the current timeline in Fire Emblem Awakening due to the fell dragon Grima and his legions of Risen zombies bringing her own world to ruin. Desperate to reverse this unfortunate event, she and other future children of Chrom's allies, the Shepherds, travel back in time to prevent the revival of Grima in Chrom's timeline and change the future. When she travels back in time, she initially hides her identity by tying her hair back and wearing a distinctive mask given to her by Gerome, one of her allies from the future, and adopting the name "Marth" from her famous ancestor. She runs into Chrom and the Shepherds, saving her aunt Lissa from the first of the Risen on one occasion and later dueling Chrom in Arena Ferox. Her disguise is ruined during an assassination attempt on her aunt Emmeryn while defending Chrom, causing her to disappear, only to reappear two years later, again defending Chrom from an assassination. She is accidentally revealed to be a woman after an unexpected assassin appears and cuts her mask off before being killed by Chrom. Later, she confirms that she is his daughter by allowing him to see the Brand of the Exalt in her eye, just like his newborn daughter. Lucina then joins the Shepherds to assist them in a new war.

In game, Lucina starts out as the Lord class by default, inheriting the class from Chrom. As she is pivotal to the story, she is the only child unit whose recruitment is forced, and one of the few units that will not be permanently lost, even in Classic mode. Like Chrom, her weapon of choice is Falchion, but her version of the famed sword is the Parallel Falchion brought back from her future. Unlike Chrom's version, it is more powerful and can be used to self-heal, whereas Chrom's Falchion is initially weaker with its power sealed away and must be upgraded before the final battle to become stronger than Lucina's. Lucina can either be a potential wife for male or female Robin's daughter if the latter is married to Chrom. There is also a variety of potential affine relationships between Robin and Lucina which are not acknowledged in game.

Alongside international success of Fire Emblem Awakening, Lucina has become one of the most popular Fire Emblem characters worldwide outside of Super Smash Bros. Since her debut, she appeared as a guest character in Fire Emblem Fates and Code Name: S.T.E.A.M., in both cases summoned in-game using her amiibo. She appeared with Chrom and fellow smasher Ryu in Project X Zone 2, a crossover strategy game featuring characters from Bandai Namco, Capcom, Sega, and Nintendo.

The Parallel Falchion (裏剣ファルシオン Uraken farushion, lit. Secret Sword Falchion) is Lucina's weapon. It is actually the same Falchion wielded by Marth, created by the divine dragon Naga in the war against the Degenerated Dragons, and gifted to humankind to defend themselves along with its sister weapon, the Fire Emblem.

In Awakening, Marth presumably passed down the Falchion through his lineage, and is currently wielded by Chrom. However, in the alternate future, Lucina inherits the Falchion after Chrom's betrayal by a close ally, and she brings it to the past to change her future, hence the name being the Parallel Falchion due to it coexisting alongside the mainstream Falchion. While the Parallel Falchion does have more base power than the original Falchion and can deal damage against Grima, it cannot be used to seal Grima due to its power not being truly Awakened.

Like Marth, Lucina uses the Parallel Falchion in all of her attacks except her throws. 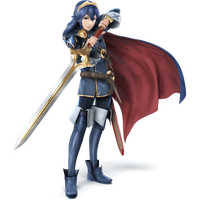 Lucina debuts as an unlockable newcomer in Super Smash Bros. for Nintendo 3DS and Wii U. She functions as a clone of Marth, meaning that she shares the same movement and attack style as him, but with the main difference being that the strength of her Parallel Falchion is balanced throughout all parts of the blade, rather than stronger at the tip like Marth's Falchion. She was originally planned to be an alternate costume of Marth, but was given her own character slot later in development due to "the characteristics of their attacks being different".

Lucina (Alt.)
Lucina's moves are much like Marth's, but there are subtle differences. With Marth, you need to try to hit with the tip of his sword, but Lucina's sword is equally powerful all along the blade. Her Shield Breaker move lets her attack opponents and break their shields at the same time. Charge it fully to shatter shields in one hit.

Lucina returns as an unlockable veteran in Super Smash Bros. Ultimate. Lucina is officially dubbed an Echo Fighter, a term that usually describes clones of a certain character, in her case being a clone of Marth. She her height has been adjusted to match Marth's.