This article is about Lucas' appearance in Super Smash Bros. for Nintendo 3DS and Wii U. For other uses, see Lucas.

Lucas is a downloadable character in Super Smash Bros. for Nintendo 3DS and Wii U. He was confirmed as a surprise announcement during Nintendo Direct on April 1st. He became available for download in June 14th, 2015, alongside Roy and Ryu.

Changes from Brawl to Wii U/3DS

Lucas has been balanced with both buffs and nerfs. Most of his moves have the same or similar frame data to their Brawl counterparts. Some of his nerfs include removal of advanced techniques seen in Brawl, such as Zap Jump and Magnet Pull, as they were glitches.

Physically, he received the same treatment as Ness: larger eyes, rounder face and smaller head in proportion with his body, as well as having a brighter color scheme (like all characters in this game).

Lucas used to be weak-willed, and cry all the time. However, he overcame unimaginable hardships, and must surely be out adventuring, or perhaps, he's found a partner and made a family of his own... No ... It's too soon. To fans of the MOTHER series, both Lucas and Ness will be young forever. 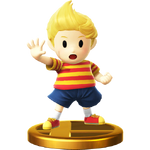 The younger of the twin brothers from Nowhere makes his triumphant return to the game of Smash. Hailing from the Japan-only game Mother 3, Lucas’s specialty is psychic projectile attacks. He can use these PSI attacks to do things like absorb enemy projectiles and deal supernatural damage! 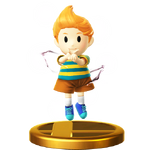 Lucas’s up special PK Thunder can hit enemies multiple times, but if you hit yourself with it, you can then tackle and launch opponents! Lucas’s up smash has the strongest launch power of any fighter’s up smash. The range for this attack is wide, and it’s strongest right after Lucas unleashes the attack. 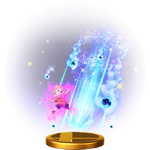 You can adjust the direction of the shooting stars in this attack! Rain stars down on multiple fighters at once, or be mean and pick on a single fighter. The choice is yours! If a star connects, it will deal ongoing fire damage, making it hard for opponents to return to the stage.

Retrieved from "https://supersmashbros.fandom.com/wiki/Lucas_(Super_Smash_Bros._for_Nintendo_3DS_and_Wii_U)?oldid=494853"
Community content is available under CC-BY-SA unless otherwise noted.