This article is about Lucas' appearance in Super Smash Bros. for Nintendo 3DS and Wii U. For other uses, see Lucas.

Changes from Brawl to Wii U/3DS

Lucas has been confirmed to have some buffs in his moveset, as well as nerfs. Physically, he received the same treatment as Ness: larger eyes, rounder face and smaller head in proportion with his body, as well as having a brighter color scheme (like all characters in Smash Bros. 4). Most of his moves have the same or similar frame data to their Brawl counterparts.

Lucas used to be weak-willed, and cry all the time. However, he overcame unimaginable hardships, and must surely be out adventuring, or perhaps, he's found a partner and made a family of his own... No ... It's too soon. To fans of the MOTHER series, both Lucas and Ness will be young forever. 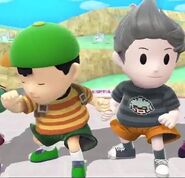 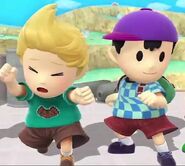 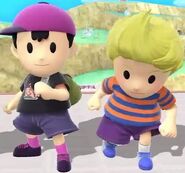 Retrieved from "https://supersmashbros.fandom.com/wiki/Lucas_(Super_Smash_Bros._for_Nintendo_3DS_and_Wii_U)?oldid=487291"
Community content is available under CC-BY-SA unless otherwise noted.