Lucas as he appears mid-game in Mother 3, after a few years have passed.

Lani Minella
Lucas (リュカ, Ryuka?) is the main protagonist in the EarthBound/MOTHER universe, debuting in the Japan-only MOTHER 3 for Game Boy Advance.

Lucas is a timid young boy that is 6 years old at the beginning of the game, and 12 at the end. His mother, Hinawa, died protecting Lucas and Claus from a mechanized Drago. Lucas is Claus' younger twin.

After the first three chapters of the game (when he grows up), he is drafted by Wess to find Duster at Club Titiboo. On the way, he learns PSI and begins to battle the Pigmask Army and pulls 4 of the 7 sacred needles to awaken the Dark Dragon living under the Nowhere Islands, the other 3 being pulled by his twin brother, Claus, who was transformed into a chimera and brainwashed by the Pigmask Army after he tried to avenge the death his mother.

While Lucas does not make any appearance in Melee. Sakurai updated Ness's profile page on July 17, 2001, and he said that Lucas was meant to replace Ness as a playable character. However, Ness was instead retrieved as a fighter due to the cancellation of Mother 3 on the Nintendo 64, the first version that Mother 3 had been worked on.

To quote Sakurai on the matter:

Both Ness and Lucas would ultimately appear as playable characters in Super Smash Bros. Brawl. 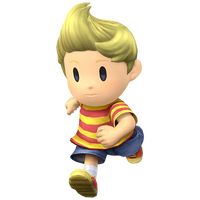 Lucas makes his debut in the Smash Bros. series as a playable character in Brawl without replacing Ness. All four of Lucas' special moves are similar to Ness', but with some key differences. For example, the orb of Lucas' PK Thunder goes through opponents and can deal multiple hits, while the orb of Ness's PK Thunder disappears on contact. Lucas also has near-identical physics to Ness's along with having a couple of similar attacks, classifying him as a semi-clone of Ness. The reason for this was because Sakurai stated in an interview with then-president Satoru Iwata that when Sakurai found out Mother 3 would never be released in North America, he decided against his original idea of having Lucas replace Ness, they'll both be in the game instead.

Lucas
The younger of twin brothers living in Tazmily Village in the Nowhere Islands. He's a kind boy who can communicate with animals, but he's shy and never really got over the tragedy that struck his mother. He fights a warped dictatorship, hunts the Seven Needles, and crosses swords with his missing brother, Claus. In the end, the young boy with psychic PSI powers grows up. 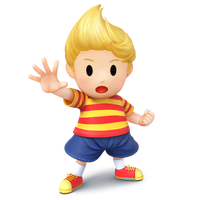 Although Lucas was not present in the final roster upon the initial worldwide release of the game, he was confirmed to return as a DLC playable character on April 1st, 2015 and was released worldwide on June 14th, 2015. His non-fighter trophy appears in both versions of the game, in addition to his special moves which are available as custom special moves for Ness.

Visually, Lucas' moveset is almost totally unchanged from the Brawl, though his Final Smash, PK Starstorm, has been altered to be similar to Ness' version.

Lucas
Before adventuring, Lucas was a timid, cautious boy. His journey has made him a stronger person. Maybe he met someone to spend his life with... Hang on—we're moving way too fast! For now, remember that Lucas and Ness are favorites in the hearts of EarthBound fans.

Lucas
The younger of the twin brothers from Nowhere makes his triumphant return to the game of Smash. Hailing from the Japan-only game Mother 3, Lucas's specialty is psychic projectile attacks. He can use these PSI attacks to do things like absorb enemy projectiles and deal supernatural damage!

Lucas (Alt.)
Lucas's up special PK Thunder can hit enemies multiple times, but if you hit yourself with it, you can then tackle and launch opponents! Lucas's up smash has the strongest launch power of any fighter's up smash. The range for this attack is wide, and it's strongest right after Lucas unleashes the attack.