This article is about Lucario's appearance in Super Smash Bros. for Nintendo 3DS and Wii U. For other uses, see Lucario.

Lucario is a returning veteran in Super Smash Bros. for Nintendo 3DS and Wii U.

It currently ranks 17th on the tier list. Lucario's kill power is unmatched and it is able to quickly turn a match to its favor thanks to its aura mechanic in addition to rage. Lucario's combo game is good as well, having exceptional range and power on attacks; unfortunately Lucario has considerable lag on some attacks and lacks a good number of reliable set-ups into its kill moves, landing it in the B tier.

Lucario is an All-Rounder, with very balanced stats; while its movement speed is somewhat a bit slow, it has the highest traction in the game, which allied with its floatiness plays a lot in its favor in order to pull combos. Lucario is also a Power type character, with a gameplay that revolves around the Aura, an unique mechanic exclusive to Lucario, where its normal attacks, throws and Specials will deal more damage and knockback the higher its damage percentage is. It is hard to calculate the exact amount of damage added to each attack, however the multiplier starts at 0.66x with Lucario at 0%, with a cap 1.7x when Lucario reaches 200%, meaning all attacks will have achieved its max power. Also, when Lucario uses its new Final Smash, Mega Lucario, all attacks will hit at max power independently of its damage.

With high aura, Lucario's moves become incredibly strong, to the point of surpassing other powerhouses, such as Bowser and Ganondorf. In addition, the newly introduced Rage mechanic stacks with Lucario's Aura, further improving its power. Because of this, Lucario is especially good against damage-racking characters that don't have many launching options, like Zero Suit Samus and Pikachu. Likewise, characters that can KO early (great launch power), in theory, tend to do better against him, like Bowser, Charizard, and Ike. The first step to playing Lucario is to manage its aura. Its special moves become especially powerful when Lucario gets above 100%.

This also makes Lucario extremely good in 1 on 1 matches, because if it manages to get a stock advantage, it will be able to deal massive amounts of damage before being KO'd, "evening" the stocks. But of course, skill is the determinant factor in this.

One of Lucario's greatest assets is the safety of its moves. Nearly all its moves are imbued with the Aura in the form of blue concentrated energy. For example, both Force Palm and Forward Smash release a burst of Aura, which have transcending priority, meaning those effects can't clash with other attacks. This gives Lucario a huge advantage against most opponents, as it will almost always outrange their attacks without much retaliation.

Aura Sphere, the Neutral Special, is Lucario's most powerful and important asset among the Special Moves. Its size is affected by the Aura, to the point of enlarging almost twice its normal size when Lucario is above 100%; hitting an opponent with a fully charged Aura Sphere in this state, especially when off stage, can result in a KO. At the start of Lucario's stock, a player may only want to use Aura Sphere in order to rack up damage and stage control, but once it gets over 50%, players will want to make sure they always have one of these charged up. A good opportunity to fully charge Aura Sphere is after launching an opponent offstage, and charging while they are making their way back to the edge. Players can also catch an opponent in it while charging, and then preform a jump-canceled Up Smash out of shield. Another good strategy with Aura Sphere is to use the charging animation for edge-guarding, by moving to the edge until Lucario is in its balancing animation, then turning around and begin charging Aura Sphere. One of a few things may happen:

2) They'll grab the ledge and try to climb up. They will be hit with Aura Sphere and be unable to attack or move. Simply do the same thing here as in number one. This may also works in the case of a ledge attack.

3) They'll grab the ledge and roll to get past the Aura Sphere. In this situation, they'll end up in front of Lucario. Just hit the special attack button to immediately launch the Aura Sphere and hit them.

Force Palm has incredible range when reaching 100% or more, and is very useful for zoning. It can also grab if the attack is activated close enough to an enemy. The Force Palm grab is more damaging than its regular throws even at 0%, so if the opponent is shielding, try going for a Force Palm. If the player isn't confident that they'll get the grab on it, they should go for a grab and throw instead.

Extreme Speed is an astounding recovery that covers great distance and also deals some damage to opponents as well. The move can also be angled, allowing Lucario to control its trajectory by inputting left or right along with the Up Special command. An edge-guarding opponent won't be able to hit Lucario due to its fast speed, and if they try to intercept him, they may take damage from Lucario instead. The move has high landing lag but if Lucario lands on the opposite side of the stage from where they were edge-guarding it will give Lucario enough time to recuperate from the landing lag and get back into the battle.

Double Team is very powerful when Lucario is at high percentages and if the opponent's attack is a highly damaging attack. These two factors put together create a deadly move that can kill most characters pretty early in a stock. Just remember not to use it excessively.

Lucario's ground game is solid and very combo friendly. Its Neutral Attack is a very effective attack that can trap most characters for all three hits, and can also be cancelled into a grab. Forward and Down Tilts, while not very powerful, are great for executing combos and spacing. Lucario's Up Tilt can combo with itself, especially against fast fallers, and can also start various juggling setups.

Lucario's aerial game is notable for its range and utility for combos, with high number of active frames, meaning Lucario can use bait air dodges. Its aerials also have low ending and landing lags, which, combined with Lucario's floatiness allows it to string many aerials before touching the ground. Neutral Aerial covers a wide area, is great for starting combos, and has pretty good launch power too. Forward Aerial can combo with itself and other moves, and its useful for edge-guarding. Back Aerial is Lucario's strongest aerial, being a good combo finisher, and can KO most opponents at just above 100%. Up Aerial is great for juggling, being very useful after Up Tilts. Down Aerial has pretty good attack power, however it is more useful as a defensive move for avoiding attacks and mindgames, as it stalls Lucario in midair, even while falling. If Lucario is descending onto the stage from above and an opponent is on the ground ready to use an anti-air move, using Down Aerial will momentarily halt Lucario's momentum, which can allow for a quick change of direction to catch the opponent off guard. If the opponent is charging an Up Smash and the Down Aerial is used, quickly change direction so that the Up Smash won't hit Lucario, and fast fall. Once on the ground the opponent will suffer whatever lag comes from their Up Smash, giving Lucario's chance to retaliate..

Lucario's throws are the bread and butter of its gameplay, being its main tool for combos. Forward and Down Throws are the best for starting combos. Back Throw is a decent kill throw, however only when Lucario is at high percentages. Up Throw is good for juggling setups against opponents at lower percentages.

Lucario's flaws, however, lies in its too balanced stats, which can sometimes prevent him from fully using the maximum potential of its Aura. Being a middleweight and floaty, it usually takes few strong attacks to finish off Lucario. Despite its combo potential, they are very limited and reliant on throws, as most of its other combos are dependent on Lucario's own position due the properties of the hitboxes in most of its attacks. Its most serious flaw, however, is the functionality of its moveset, having weak fast moves and slow strong moves, that are usually very easy to punish. In addition, the Aura mechanic can sometimes work agains it; with low Aura, its most powerful moves are too weak to KO, while with high aura, its combo moves are too strong to chain together. Also, at higher percentages, Lucario's Aura becomes a double-edge sword: dealing high damage, but cannot afford to commit mistakes. Finally, Extreme Speed is a recovery move very dependent on Aura to be effective: its speed and range scales with the Aura, being very slow and covering low range at low percentages; at very high percentages, the move is hard to maneuver, and it is possible for Lucario to overshoot the stage and suicide if not properly aimed.

Overall, Lucario is a very technical character that must rely on combos when itself is at low percentages, and being at higher percentages grants him tremendous power that can easily finish off opponents at the lowest percentages. However, players must be patient and aware of Lucario's weaknesses to prevent opponents from exploiting them.

Despite being a high tier character in Brawl, Lucario received more buffs than nerfs, with a more powerful aura system that helps it in both damage and recovery departments.

The damage variations (X% ~ Y%) refer to Lucario's attack growth ability, X being the minimal damage and Y the strongest it can get.

◾Down Aerial – Kicks downwards twice, sending aura blasts from its feet. Slows its descent, though less than Brawl. At low damage, each kick deals 3%, but hit both for 7%. In higher damage, the first kick deals 8%, and the second, 10%.

Long hop
Add a photo to this gallery

Lucario was seen shining most recently at Frostbite, Where Japanese player Tsu defeated many strong opponents and took the famous ZeRo to game five, however he lost.

A Fighting/Steel-type Pokemon that excels in combat through the reading and manipulation of Aura. As Lucario takes more damage, its attacks grow in strength. At maximum power Lucario deals triple damage and its Aura Sphere is particularly devastating! Foes won't even know what hit them!

Lucario's up special Extreme Speed will send this Pokémon searing on the path you choose. Lucario flies farther the more damage it's taken. Lucario makes use of its Aura for the side special Force Palm. At extremely close range, Lucario will grab an enemy first, dealing additional damage. 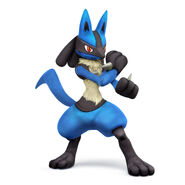 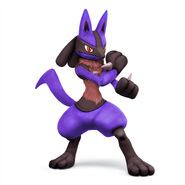 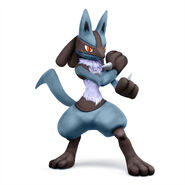 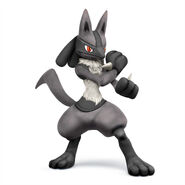 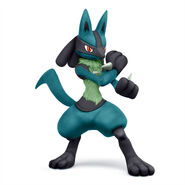 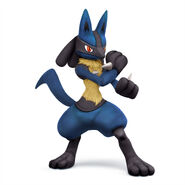 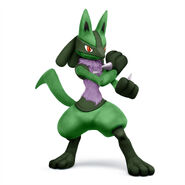 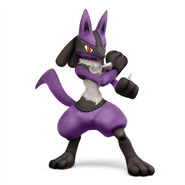 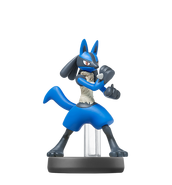 Retrieved from "https://supersmashbros.fandom.com/wiki/Lucario_(Super_Smash_Bros._for_Nintendo_3DS_and_Wii_U)?oldid=576840"
Community content is available under CC-BY-SA unless otherwise noted.