Daisuke Namikawa
Lucario (ルカリオ, Rukario?) is a fictional creature in the Pokémon media franchise, appearing as the representative of the fourth generation of the Pokémon series in the Super Smash Bros. series.

Lucario is a bipedal, jackal-like Fighting/Steel-type Pokémon that's around four feet in height, and is generally agreed to resemble the Egyptian deity Anubis. Lucario is a Pokémon that evolves from the Fighting-type Riolu; in the Pokémon RPGs, Riolu evolves when it gains a level while its "Happiness" rating has achieved a high point, and only during morning, daytime, and afternoon hours.

Lucario’s first appearance prior the game debut along with its pre-evolved form was in Pokémon: Ruby and Sapphire movie Lucario and the Mystery of Mew, as a male Lucario.

Lucario's signature ability is being able to detect and wield an energy named Aura, a force that surrounds every living thing. According to the Pokédex, by picking up on the aura emanating from others, it can read their thoughts and movements, and a well-trained individual can sense and take in the feelings of creatures over half a mile away. Since they can detect Aura from every living being, enemies that are hiding or even invisible, will be found by Lucario. A Lucario even found Snake after he was hiding under a box during the invasion of the Halberd during the Subspace Emissary. Lucario can even gather enough Aura to create an Aura Sphere, at 80 percent, Fighting-type attack that will never miss. If Lucario can gather enough Aura, they can create an Aura Storm, which is their Final Smash in Super Smash Bros. Brawl (not a real attack in the Pokémon RPs).They can understand human speech and can use telepathy to speak with humans. Lucario can learn the attack Psychic as well, showing that Lucario are capable of having psychic powers (most likely using Aura to do so).

Lucario can Mega Evolve into a Mega Lucario. Mega Lucario has increased offenses and speed but retains the same amount of defense levels it had as a Lucario. Regardless, Mega Lucario improves upon the stats that Lucario already had before Mega Evolution (in Smash Bros., Mega Evolution increases the power of its Aura). Lucario are weak to the Fire, Ground and Fighting but are immune against the Poison-type since they are part Steel. Lucario are very rare Pokémon in the wild but typically live in the mountains but have been found to live in grasslands. Lucario evolves from Riolu when a Riolu's happiness levels with its trainer is very high and it levels up anytime during the day. 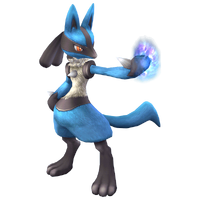 Lucario is unique in that the more damage it takes, the more damage, range, and knockback its own attacks have (based on the actual ability of most Lucario in the Pokémon series). This only applies to its Aura-powered attacks (noted by a bluish flame or aura), but there are few attacks in its arsenal that don't use Aura (its dash attack and back throw, among others). This trait makes it not particularly useful at the beginning of a life, but if it survives at a high damage level, it becomes ridiculously deadly.

Its Neutral Special Move is a chargeable ranged blast comparable to Samus's Charge Shot. Its Side Special Move is a short range blast, or at point blank, a throw. Its Up Special Move is a non-damaging recovery move, it will move in any direction pressed. Its Down Special Move is a counterattack, that is, it will harm a character who tries to attack it within a brief time period. It is an Aura-powered counter, and its damage caps at about 15%. Finally, its Final Smash involves it flying above the center of the stage and then fires a powerful beam attack which can be directed left or right.

Lucario also has the ability to both wall jump and wall cling; with its wall jump height being by far the highest in the game, and can gain more height thanks to its Aura system. Due to Lucario having a similar moving style to Mewtwo, from Melee, rumors spread that it has "replaced" Mewtwo.

On January 21, 2008, a promotional video for Super Smash Bros. Brawl on the official Wii website was posted that showed a Groudon sticker being highlighted and the faces of Pikachu, Pokémon Trainer, Lucario, and Jigglypuff to show that the sticker can be used to power-up these four characters in Adventure Mode. This was essentially a confirmation that Lucario would be a playable character in the game. This video can be viewed here. 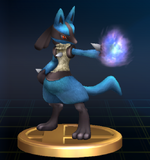 Lucario
An Aura Pokémon. It can track energy called Aura, which is given off by all living creatures. It's a unique combination of both Fighting and Steel-type Pokémon. Lucario evolves from Riolu during the day if its happiness has reached its maximum point. It specializes in attacks that use Aura energy, like Dark Pulse and a can't-miss technique, Aura Sphere. 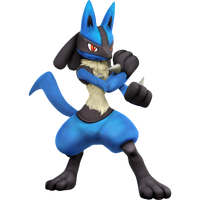 Lucario returns as a playable character in Super Smash Bros. for Nintendo 3DS and Wii U. Its appearance has been updated to closely match its design in Pokémon X & Y. Its English voice actor has been changed to Sean Schemmel, who had voiced the Lucario in the English version of the Pokémon movie Lucario and the Mystery of Mew.

Lucario retains all of its special moves from Brawl as well as the Aura mechanic, which has been made more powerful and now affects all of its attacks. Its Final Smash is now Mega Evolution, in which Lucario temporarily Mega Evolves into Mega Lucario, increasing the power of its aura attacks to maximum.

A Fighting/Steel-type Pokémon that excels in combat through the reading and manipulation of Aura. As Lucario takes more damage, its attacks grow in strength. At maximum power, Lucario deals triple damage and its Aura Sphere is particularly devastating! Foes won't even know what hit them!

Lucario's up special Extreme Speed will send this Pokémon soaring on the path you choose. Lucario flies farther the more damage it's taken. Lucario makes use of its Aura for the side special Force Palm. At extremely close range, Lucario will grab an enemy first, dealing additional damage. 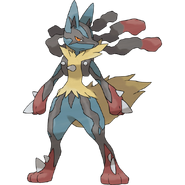