Little Mac (リトル・マック, Ritoru Makku?) is the main character of Nintendo's Punch-Out!! series of boxing video games. Like his name suggests, his height is very little. Despite his size, he managed to defeat many large opponents in a boxing tournament, making him a champion.

Hailing from the Bronx, New York, Mac aspired to become a professional boxer. However, standing at only 4'8"/142 cm (5'7"/170 cm in the Wii remake), his small stature turned most trainers away from taking him on. Upon meeting former heavyweight champion Doc Louis, however, Mac became strong enough to enter a boxing tournament hosted by the World Video Boxing Association (WVBA) under the ring name Little Mac, defeating opponents who were increasingly bigger than him, ultimately becoming the WVBA champion by knocking out the top-ranked boxer (either real-life boxer Mike Tyson in the original NES game, Mr. Dream in all re-releases of said game, or Mr. Sandman in the Wii game).

After conquering a circuit, Mac would continue to train with Doc, often jogging through New York City in a pink sweatsuit while Doc biked ahead. The Wii version also details the other exercises Mac would go through in Doc's gym. The greatest asset Mac gained from this training was Doc's patented Star Punch technique; after stunning an opponent, Mac could deliver a powerful uppercut instead of his usual jabs and hooks.

In the multiplayer "Head-to-Head" mode in Punch-Out!! for Wii, Mac has the ability to transform into a giant called Giga Mac. While in his Giga Mac state, Mac is much slower, but can hit as hard as some of the opponents he faces. This move later became his Final Smash in Super Smash Bros. for Nintendo 3DS and Wii U.

Little Mac makes an appearance in Super Smash Bros. Brawl as an Assist Trophy. When summoned, he dashes about the stage to opponents, attacking by dealing two straight punches and an uppercut. The punches do a good amount of damage and the uppercut is devastating because it has very high power, dealing 25% damage, and knockback, and is an instant shield breaker. If at the right damage percentage, Little Mac can easily knock out opponents for the one who summoned him, but he is unreliable as he often falls off the stage. The punching sound effects from Punch-Out!! can be heard as Little Mac attacks. Little Mac receives his own trophy in the game, like all other Assist Trophies.

Little Mac
A lightweight scrapper from the Bronx. After meeting with a former boxing great named Doc Louis who fell from glory, Mac takes Doc on as his coach, and together the pair try for the championship belt in the WVBA. Little Mac works his way up the ranks of the WVBA, taking out foes several times his size. By landing multiple blows, Little Mac gains a "☆" uppercut. 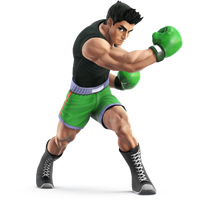 Little Mac appears as a new playable character in Super Smash Bros. for Nintendo 3DS and Wii U, having been revealed on February 13, 2014 during a Nintendo Direct. Unlike in Brawl, Little Mac sports his design from the Wii version of Punch-Out!!. As expected for a boxer, Little Mac is a close-ranged fighter, with all of his attacks being some variation of a punch. Although he is among the fastest characters in the game and his ground attacks are powerful, Little Mac is far weaker while in the air, as his attack power drastically decreases. Additionally, Little Mac's jumping and aerial attributes are very poor, as his air speed is only around average, his air acceleration is very low, and he falls quite fast as well. To add to this, Little Mac is also a lightweight, making it easy for fighters to send him flying. Little Mac is also has a Power Meter that, when fully charged with damage dealt or taken, replaces with Neutral Special Move with KO Uppercut, which is a powerful uppercut with devastating KO power.

Unlike all the other playable characters in the game (with the exception of Wario), Little Mac as a total of 16 selectable alternate costumes, with eight of them being him in his regular outfit while the other eight features him in his Wireframe design from the arcade version of Punch-Out!!. Both outfits also features him in a hooded sweatsuit, with the colors being inverted when selected in his Wireframe design. When using the Wireframe design, all of Little Mac's voice clips are replaced by 8-bit sound effects.

Little Mac
This little boxer from the Punch-Out!! series makes up in heart what he lacks in height. He wasn't afraid to take on the boxing champs, and he's not afraid of the Nintendo stars. In Smash Bros., he packs a serious punch. When his KO Meter fills up, wade in and trigger a devastating uppercut.

Little Mac (Alt.)
No matter his opponent, Little Mac always puts his best fist forward. He enters a charge state before unleashing his Straight Lunge special and can unleash it while charging by pressing the button again. He won't flinch while charging. At max charge, the launching power of this move is scary!

Little Mac (Captain Rainbow)
Wait. Is...is that Little Mac from Punch-Out!!? We'd heard he went to Mimin Island to train to become a world champion again, but it looks like he went a few too many rounds in the ring with those island mangoes. If you don't help him get back in shape, we might need to come up with a new name for him...

In Ultimate, Little Mac is very similar to his previous smash iteration; although he has varying small changes, he has one big change: he can now use his up special after using his side special in the air. This is useful for Mac because it allows him to recover from greater distances than he could in the last game. Even with this change, Mac is still very much vulnerable when he's recovering.