This article is about Link's appearance in Super Smash Bros. for Nintendo 3DS and Wii U. For other uses, see Link.

Link is a veteran fighter and a starter character in Super Smash Bros. for Nintendo 3DS and Wii U.

Link is the definition of a solid and balanced, yet a very versatile character. He has all-around but above average attributes, being able to play either defensively or offensively. With a good variety of melee and ranged attacks, Link can control the space near him, interrupting opponents and punishing them accordingly. All his attacks (save for Neutral Aerial and Back Aerial) have disjointed hitboxes, giving him advantage over opponents.

He can perform good variety of combos, many that start on air and string on the ground. His Neutral Aerial, for example, is one of his best combo starters from air to ground or air to air. It's a sex kick with good priority that can set up for many follow ups, depending on the opponent's DI. A fast-fall short-hop Forward Aerial or Back Aerial can also lead to many true combos.

Link has a good variety of advanced techniques with his Bombs, allowing him to trick opponents with effective mindgames, similarly to Snake with his grenades in Brawl. Since the bombs no longer hurt Link when thrown at opponents near him, players can use this small window of opportunity to follow up with other attacks, as the explosion causes significant hitstun.

His problem, however, lacks in recovery and lag for some attacks. While his aerial Spin Attack covers good range and his Grab Aerial gives him tether recovery, his high falling speed means players must react fast when recovering.

A good Link player can control the battlefield with various projectiles while attacking with melee attacks, leaving no chance for opponents to react. His Grab Aerial can also give him extended reach in his attacks, stunning opponents briefly to follow up with more attacks. Learning to overcome some of his laggy attacks and keep safe distance between enemies is key.

While being a very low tier character in Brawl, Link received many buffs (and a few nerfs) that makes him a much better character overall.

Grab - Fires his Clawshot and reels in opponents with it. It will no longer fall on the ground when it misses like it did in previous games. Can also be used for tether recovery.

Green tunic? Pointy hat? Yep, it's Link, all right! In this game, his sword and shield make for effective attacking and blocking, and his bow, bombs, and boomerang will spice up any battle. He's even brought his Clawshot for grabbing enemies and edges. Jeez, just how much can Link carry?

If Link was on a desert island and could only pick one item, it'd be his powerful sword. This weapon is key to his down-air attack, a move with great launching potential and the ability to strike twice. He can also strike twice with his side smash—the second blow deals more damage and launches harder.

The children from Kokiri Forest never seem to grow into adults. Just a young boy, Link is entrusted with a quest by the Great Deku Tree. He leaves the forest and eventually find the Master Sword in the Temple of Time. When he awakes, he is sever years in the future and an adult!

Link is one of the few characters who have a Tether recovery, using his hookshot to grapple onto the edge. 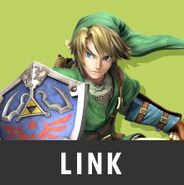 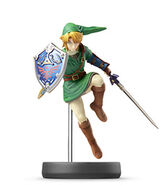 Link's Amiibo.
Add a photo to this gallery

Retrieved from "https://supersmashbros.fandom.com/wiki/Link_(Super_Smash_Bros._for_Nintendo_3DS_and_Wii_U)?oldid=494871"
Community content is available under CC-BY-SA unless otherwise noted.