This article is about Link's appearance in Super Smash Bros. Melee. For the character in other contexts, see Link. For information about Link's clone, see Young Link.

Nobuyuki Hiyama
Announced at E3 2001, Link (リンク, Link) is a starter character in Super Smash Bros. Melee. Link returns as a veteran character from the previous game, acting mostly the same as before, as a swordsman with powerful short-range attacks and a wide variety of long-range attacks. Link, however, has received some large buffs, making him a considerably better fighter in Melee.

Link is ranked 18th in the tier list, in the C- tier, which is much higher than his second to last current rank in the Smash 64 tier list (11th out of 12), and one below his clone, Young Link. Link's placement is due to a very good approach, due to some low lag aerials (with his neutral and forward air), a good variety of projectiles and a very high air speed. A disjointed hitbox also gives Link a slight advantage against others, as well as a fully functional shield that can block a wide variety of projectiles. Link is also a potent edge-guarder in the NTSC versions of the game; his Spin Attack is possibly the best semi-spike in the game, though he still has many other options. Link, however, suffers from a rather high falling speed and a high weight, making him an easy target for chain grabbing and combos. His recovery is also predictable, though he can extend it slightly. 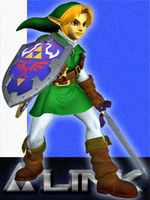 Link has poor dash speed, but he makes up for this with great range for most attacks, a variety of projectiles and quite fast air speed. He also has powerful Smash Attacks and Aerial Attacks, but their high lag and moderate startup times counterbalance this unless the player L-cancels which can remedy this. Link's grab range is large due to being a tether grab, and can be used as a wall-grapple. However, it leaves Link vulnerable if it misses, and it's difficult to grab airborne opponents, which minimizes chaingrabing opportunities. Link's Up Special Move, Spin Attack, is a quick finisher and a good edgeguarding tool. Link is vulnerable to chain grabs and combos due to his fairly heavy weight, fast falling speed, and comparatively large size.

Link is a very reliable edgeguarder due to his powerful semi-spike. Those who are trying to recover must be careful when Link is on the ledge. It's better to attack and KO from the ground than from the air. If sent to the air by Link, the semi-spike can be deadly. Falco is a candidate for being killed in one semi-spike such as other fast fallers like Captain Falcon, Fox, Sheik, Roy and Marth.

Like other characters, Link received some changes in the PAL version of Melee.

In addition to the normal trophy about Link as a character, there are two trophies about him as a fighter, unlocked by completing the Adventure and All-Star modes respectively with Link on any difficulty.

Link
Even in his youth, Link was already becoming the warrior who would carry the destiny of Hyrule (and many other lands) on his shoulders. His epic struggles against the forces of darkness are written in legend, and he is bound to the Princess Zelda and the archfiend Ganondorf by the awesome power of the Triforce.

Link (Smash Red)
Burdened with a shield, a heavy sword, and plenty of equipment, Link is not a very mobile character. Nevertheless, he's skilled with the blade, and his varied supply of missile weapons makes him a powerful fighter. To master Link, you must control the pace by balancing your long-range attacks with head-to-head swordplay.

Link (Smash Blue)
Link's Bow, Boomerang, and Bombs all take time to wield, so you may want to try drawing them in midair to prevent your foes from attacking you while you're vulnerable. The Spin Attack can score consecutive midair hits, and the final slash is very powerful. Link's Bombs are his trump card, but he can't pull one out if he's carrying another item. 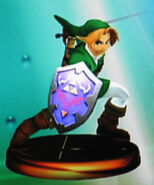