Smashpedia
Register
Don't have an account?
Sign In
Advertisement
in: Characters, The Legend of Zelda universe, Trophies,
and 26 more

Official artwork of Link from The Legend of Zelda: Breath of the Wild.

Link (リンク, Rinku?) is the protagonist of The Legend of Zelda series by Nintendo. Link is the wielder of the Master Sword and the holder of the Triforce of Courage and the savior of the princess Zelda. He appears as a playable fighter in all five Super Smash Bros. games.

Link's first appearance was as the "Hero of Hyrule" in The Legend of Zelda (1987)., Link was designed with a green tunic and a green hat which (like Mario's design) was due to limitations in the NES hardware. This appearance has since been traditional for all incarnations of Link.

Because the Zelda series has always kept Link a silent protagonist, nobody has much insight into Link's personality. However, it has been shown that Link is a brave and polite young man and is very "humble".

Because of the different incarnations of Link, the origins of each body can vary, but almost always, he is a young boy (or man) who starts out as a normal person until learning of his destiny to save Hyrule from the evil Ganon (or Ganondorf) and as his journey presses him, he becomes a hero. In Ocarina of Time, he is a young Hylian, whose mother, before dying, entrusted him into the care of the Great Deku Tree. In The Wind Waker, he is a young boy living on Outset Island, given the legendary Hero of Time's clothes. In Twilight Princess, he is an ordinary young man working at Ordon Ranch until several of the villagers' children are kidnapped by monsters which starts his adventure.

Link made his first fighting appearance (and first official appearance) in a Nintendo game outside the Zelda series in Super Smash Bros., and has traditionally appeared in all installments of the series since.

The Master Sword (マスターソード Masutā Sōdo?) is Link's sword. It is a longsword created by the goddess Hylia with the intent of defeating evil (hence its title Blade of Evil's Bane). The Master Sword is usually embedded within a pedestal within the Temple of Time, and can only be freed by the Hero of Time. In certain Legend of Zelda titles, it is the only weapon capable of defeating Ganondorf, and as such it is a certain story point for Link to claim and wield the Master Sword.

Link uses the Master Sword in all of his standard ground attacks, his pummel, and all aerials except his neutral and back aerial.

Link's first appearance in a fighting game is in the original Super Smash Bros. as one of the starting eight playable characters.

He is a slow character, but as the wielder of the Master Sword, Link's melee attacks have considerable range, which often compensates for the lack of speed, allowing him to hit opponents from farther away to continue combos. His right/left B-move is a fast Boomerang which will return to Link, a property that is useful in both comboing and combo breaking. His B-Up move is a Spin Attack, which is powerful but doesn't give him much distance for recovery. In fact, Link's abysmal recovery is often considered to be the main reason for the bottom tier placing of what would otherwise be a powerful fighter with moderate combo potential and versatile projectiles. His B-Down move allows him to pull out a Bomb. Link can throw the bomb so that it explodes after making contact, or he can throw it lightly so that it will not explode.

Link is the valiant boy hero of "The Legend of Zelda" series in which he fights against the evil Ganon to recover the Triforce. Though his tools may change with each adventure, his strength and righteousness remain constant. With his trusty sword and a variety of weapons, he takes adventure head on!
Works:

Link returns in Melee as a starting playable character.

While his play style is similar, his moves have been slightly tweaked. His B-Up move is now a much more reliable recovery jump. His new B-move is the Bow, which allows Link to fire an arrow. The arrow's range depends on how long the player holds down the B button. His Boomerang has been moved to his B-forward attack. Link is ranked 18th out of 26 characters, a significant improvement from his previous 11th out of 12 placement. This is because of his significantly buffed recovery and other numerous buffs, however he is easy to combo and juggle, especially by Fox and Falco.

By tradition, Link as a playable character is featured on his personal 3 trophies. His normal trophy is acquired by beating the Classic mode with Link on any difficulty, and his Smash Red and Smash Blue trophies are acquired the same way by beating the Adventure and All-Star modes, respectively.

Link
Even in his youth, Link was already becoming the warrior who would carry the destiny of Hyrule (and many other lands) on his shoulders. His epic struggles against the forces of darkness are written in legend.

Link [Smash]
Burdened with a shield, a heavy sword, and plenty of equipment, Link is not a very mobile character. Nevertheless, he's skilled with the blade, and his varied supply of missile weapons makes him a powerful fighter. To master Link, you must control the pace by balancing your long-range attacks with head-to-head swordplay.

Link [Smash]
Link's Bow, Boomerang, and Bombs all take time to wield, so you may want to try drawing them in midair to prevent your foes from attacking you while you're vulnerable. The Spin Attack can score consecutive midair hits, and the final slash is very powerful. Link's Bombs are his trump card, but he can't pull one out if he's carrying another item. 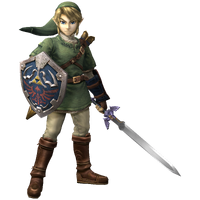 Link returns as a starting character in Super Smash Bros. Brawl, with him being one of the first veterans introduced to return at E3 2006. Aesthetically, he sports his older appearance from The Legend of Zelda: Twilight Princess. Much of his moveset remains the same, and his arsenal has been updated to reflect his new appearance.

Like all of the game's returning characters, he received a Final Smash named Triforce Slash, where he traps the opponent in a Triforce construct before repeatedly slashing at them, making it effective in trapping opponents.

Link has a trophy that is awarded each time the Classic mode is completed with Link on any difficulty. See Triforce Slash for the trophy description of Link's Final Smash:

Link
A young man who emerged to rescue Hyrule from peril. He's the bearer of the Triforce of Courage who fights to keep Ganondorf from conquering the world. His green outfit is a constant throughout the series. He's a skilled swordsman, horseman, and archer. He's also proficient with bombs and boomerangs.

Wolf Link
Link's alternate form in the Twilight Realm. In this form, he cannot use weapons such as swords or shields, but he can attack with a ferocious wolf bite. He also has a number of unique skills inherent to his beast form, such as a keen sense of smell, the ability to dig, and a loud wolf howl. 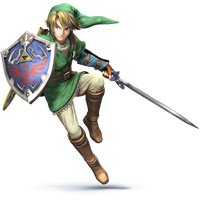 Link returns as a playable character in Super Smash Bros. for Nintendo 3DS and Wii U, revealed during the E3 Nintendo Direct on June 11, 2013. His design is once again based off his appearance on Twilight Princess, although his color scheme has been altered to being more brighter to match the vibrant aesthetics used in the game. Gameplay-wise, Link has once again received a few buffs in his moveset along with a new dash attack based off the the Jump Attack technique from some Legend of Zelda games.

Link
Green tunic? Pointy hat? Yep, it's Link, all right! In this game, his sword and shield make for effective attacking and blocking, and his bow, bombs, and boomerang will spice up any battle. He's even brought his Clawshot for grabbing enemies and edges. Jeez, just how much stuff can Link carry?

Link (Alt.)
Green tunic? Pointy hat? Yep, it's Link, all right! In this game, his sword and shield make for effective attacking and blocking, and his bow, bombs, and boomerang will spice up any battle. He's even brought his Clawshot for grabbing enemies and edges. Jeez, just how much stuff can Link carry?

Wolf Link
Hey, who let a wolf in here? This is the spot for a trophy of Link! The wolf does look cool, though... Oh, oops! That wolf is Link, from Twilight Princess, after he steps into Twilight. It's actually a pretty handy transformation. Maybe the Master Sword can help him transform at will... 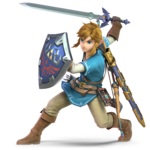 As per tradition, Link returns as a starter character in Super Smash Bros. Ultimate. Link received numerous changes to closely resemble his recent appearance in The Legend of Zelda: Breath of the Wild, and he possesses an alternate costume based off of the Hero of the Wild set from the same game, which resembles his classic appearance in previous Legend of Zelda titles.