A Light Arrow hits all targets in a straight line, doing high damage and KO'ing most of them
The Light Arrows are Zelda's and Sheik's Final Smash that was shown in CoroCoro magazine beforehand and confirmed at Smash Bros. DOJO!!. When used, Zelda/Sheik draws a large bow and sets an arrow. During this time, any characters in her line of sight will flinch. A second later, the Light Arrow is released, dealing significant damage and likely KO'ing the struck characters. The move goes through walls, and when used, the match will pause as the camera does a slow-motion close-up of each hit character in order (similar to the Dragoon).

While the basic move is the same whether Zelda or Sheik uses it, there are some differences. The primary difference is that Sheik sends opponents flying almost parallel to the Light Arrow, while Zelda sends them at more of a 45 degree angle. Sheik's Light Arrow also does more damage, but not significantly.

The damage & properties of the arrow are slightly different for either character. The move can hit a maximum of 6 targets (Ice Climbers x3) but the damage and knockback weaken for each target hit. Thus if used on many opponents, it may not KO the ones in the back, even at higher percents.

Spacing is very important when using the Light Arrow. If the opponents are too close together, they may collide with each other and prevent KOs from happening. This is even more important in the Sheik version where opponents are launched at a very low angle.

However, these numbers can be further weakened with more targets. (i.e the Ice Climbers)

In conjunction with the Master Sword, Light Arrows have been used since The Legend of Zelda: Ocarina of Time as the ultimate weapon against Ganondorf. (In the original Legend of Zelda, Silver Arrows were used in much the same way.) Link wielded the Light Arrows in OoT, while in The Wind Waker and Twilight Princess, Zelda used them alongside Link in the final battle. Light Arrows were at times the only way to deal damage to Ganondorf, and they could defeat any normal enemy in one hit. The appearance of the Light Arrows and the bow used in this move are derived from their appearance in Twilight Princess. 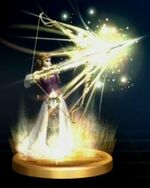 Princess Zelda's Final Smash. She wields a mighty bow of light with which she can attack from afar. Her arrow travels in a straight line and flies through all characters unlucky enough to be in the way. This attack cannot be blocked. The more enemies there are, the higher the chances to get them all with one shot. More is always better!

Sheik's Final Smash. After grabbing a Smash Ball, Sheik will be able to wield a bow of light. The arrow fired from this bow has the power to pass through multiple targets, so it will damage all enemies in the direction it flies. This, coupled with its shield-breaking power, makes it even more terrible. Even in Sheik form, Zelda's ability as an archer is undiminished.