Leviathan (リヴァイアサン, Rivaiasan or リバイアサン, Ribaiasan) is a recurring summon in the Final Fantasy series. He appears as a stage hazard in Super Smash Bros. for Nintendo 3DS and Wii U for the Midgar stage.

Like the other four summons, Leviathan has a chance of appearing when a player gets a Summon Materia, and appears in his Final Fantasy VII incarnation.

He will use Tidal Wave, which, as the name suggests will cause a massive wave. The stage will then be surrounded in water and move through it. The water will rush rapidly, and anyone caught in it will be dragged off the blast line similar to Jungle Japes. If this happens, then the player who summoned Leviathan will be awarded the KO. He is the only Summon that doesn't inflict damage to opponents. 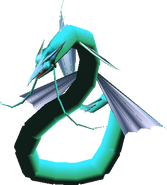 The water caused by Tidal Wave rushes against Midgar.

Leviathan was introduced in Final Fantasy II, however only became available as a summon starting with Final Fantasy III, where he attacks with Tidal Wave, which deals Water damage. In other games his attack is referred as Tsunami. He is often referred as "The Sea King", or "Lord of All Waters".

The Leviathan Summon Materia is obtained in Wutai Village after Yuffie defeats the fifth and last Pagoda God, Godo. Since Yuffie is an optional character in the game, Leviathan is also optional and can be missed but obtainable at any point; the Materia is given automatically upon victory.

Leviathan (Biblical Hebrew לִוְיָתָן or לווייתן Liwyāthān, meaning "twisted" or "coiled") is a violent sea creature that is referred to in the Hebrew Bible, as well as the Talmud and some other ancient Jewish texts. In Modern Hebrew, it simply means "whale", and was often depicted as one (or as a dragon) in the ancient texts and illustrations. During the Golden Age of seafaring, the term Leviathan became synonymous with any large sea creature, sometimes describing whales. Bible scholars interpreted Leviathan to be a demonic sea creature and an enemy of God (sometimes depicted as an aspect of Satan). The Leviathan is often associated to its land counterpart, the Behemoth (which is also a recurring creature in the Final Fantasy series); it is said that these will be served up to the righteous at the end of time