For the item of the same name, see Launch Star (item)

Launch Star is Rosalina & Luma's Up Special Move. Rosalina conjures up a Launch Star from the Super Mario Galaxy series to launch her upward to safety.

Using Launch Star will cause Rosalina to shoot upwards. The angle of trajectory can be changed by tilting the control stick. Launch Star can send Rosalina a great distance both vertically and horizontally. It is a good recovery, but it is also a bit dangerous; it does not do any damage or knockback meaning it is vulnerable to edge-guarding. Launch Star also has a lot of ending lag so if Rosalina misses the ledge and recovers right on to the stage she can be easily punished.

Launch Star Plus sends Rosalina skyward quicker, but she can't control the angle of ascent.

The Launch Star Plus custom variation launches Rosalina and Luma at a steeper angle, granting more vertical distance as well as launching Rosalina higher and much faster, making her difficult to gimp. The angle of ascent cannot be changed by the player with directional inputs, always launching her up at the same angle, which can make her recovery more predictable for opponents. This also limits her horizontal movement, making it poor for getting back to the stage when launched farther away. Since it launches Rosalina so high into the air she is left helpless for longer, leaving her open to enemy attack unless the move is ledge-canceled.

Launch Star Attack sends Rosalina a shorter distance than normal, but opponents that come into contact with it will be launched.

The Launch Star Attack move, unlike the other variations, deals damage to opponents hit by it; If hit at the start of the move they will be hit multiple times whilst being carried upwards with Rosalina before being launched away at the end with a final attack. The move covers less distance and is slower, making it poorer for recovery, and the amount of influence the player has on the angle of ascent is narrowed as well. The move is good for a combo finisher though, comboing out of down throw at most percentages, and could feasibly kill off the ceiling. 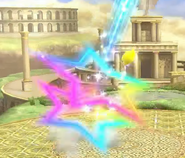 Launch Star Attack.
Add a photo to this gallery

Retrieved from "https://supersmashbros.fandom.com/wiki/Launch_Star_(move)?oldid=578059"
Community content is available under CC-BY-SA unless otherwise noted.