Summons a Landmaster to attack the opponent(s)

The Landmaster (ランドマスター, Randomasutā?) is Fox's, Falco's and Wolf's Final Smash in Super Smash Bros. Brawl, and it returns in Super Smash Bros. 3DS/Wii U as Fox's and Falco's Final Smash once again. While all three characters control the same basic vehicle, each model has its own modified attributes. It is a large and powerful machine, capable of delivering multiple KOs to a single player or group. It cannot be damaged, though SDs are possible with these heavy and somewhat unwieldy tanks.

Upon using the Final Smash, the character leaps straight upward and off screen (passing through all barriers and damaging anything in their path), where the Landmaster is dropped in his place. While other players can stand on the vehicle without taking damage, they would be ill advised to do so for long, as the Landmaster has various means of attack from both short and long range.

Its main weapon is the cannon, activated using the attack button, which fires a large blast that deals high damage and knockback. The attack will hit any characters in its path, as well as those standing on the cannon's barrel. The other means of direct attack, aside from simply landing on opponents or driving into them, is the roll. Pressing down causes the ship to roll-over in place, damaging everything near it. If the tank is on a soft platform, it will drop through instead of rolling.

Using the jump button, the vehicle's jets can also carry it upward for a good amount of time. Though it can not fire while hovering, it does have enough lift to carry opponents above it beyond the upper blast line for a star KO. As the cannon is a soft platform, players attempting to escape can drop through it.

After a time, the Landmaster begins to blink (indicating the end of the Final Smash) and soon fades away as a wire-frame, leaving the pilot in its place and jumping out.

The Landmaster is impervious to stage hazards, and unaffected by conveyor belts, but sinks in water. While the character piloting the Landmaster cannot be damaged, the remaining time of the final smash can be shortened by "damaging" it. However, in normal gameplay this may not cause a significant reduction, as the amount of damage that must be given is enormous. However, it is relatively easy to "destroy" the Landmaster by using hacks.

When he activates it, he shouts "Landmaster!"

This model is the most balanced in attributes of the three, having centered out strength and maneuverability, as well as time. It lasts 18 seconds. While powerful, this make has somewhat slow turning, driving backwards a short distance before actually whirling around (17%); and has the slowest falling speed. If an opponent is tackled by the tank, they will generally take 15% damage (depending on the speed), and each cannon blast deals 17%. Its biggest drawback is low jet speed, making it much harder to Star KO.

Fox's Final Smash. Climb aboard the Landmaster tank, the ultra-high performance, anti-air, rolling combat vehicle of Team Star Fox. Just like in the Star Fox series, the cannon can be used to blast foes, and the tank can roll over enemies. The jets beneath the main body can be used to hover. Between its firepower and mobility, this tank knows no equal.

When he activates it, he shouts "Personally, I prefer the air!".

Falco's Landmaster is very similar to Fox's Landmaster. Almost visually identical, its attacks are slightly weaker though still very powerful. Though the shots fired and the normal hits are far weaker, it is interesting to note that when the enemy is hit by a shot while standing on the cannon barrel, it is stronger than Fox's Landmaster. His 'barrel roll' gives more damage than Fox's and Wolf's, but doesn't deliver as much knockback. The knockback of the roll is vertical. The one noticeable difference is that Falco's jump jets go higher. Falco's Landmaster can fly faster than Fox's, equalling Wolf's speed, which can make easier star KOs to anyone standing on top of it. Falco's Landmaster is as fast as Wolf's in the air but is slower than both Wolf's and Fox's on the ground. It also lasts as long as Fox's. When controlled by a CPU, it has the tendency to drive or fall off the stage the moment it is activated.

Falco's Final Smash. He jumps aboard the Landmaster high-spec, anti-craft tank. With the tank's powerful cannon blasts and rolling ability, it's possible to take out all enemies at once. The Landmaster is based on actual production vehicles, but Team Star Fox's Landmaster was customized by the team's mechanic, Slippy Toad.

When he activates it, he shouts "We're gonna have fun with this thing!" (in Japanese "Koitsude asonnde yaru ze!", literally meaning "I'll play with you with this!").

Wolf's Landmaster has the same appearance of Fox's and Falco's, only sporting the red color of his Wolfen and the notable absence of the Star Fox logo on the side panel. Wolf's Landmaster is more powerful than Fox's or Falco's, capable of dealing more damage with high knockback. Its blasts are shot much faster. It has the fastest ground movement speed of the three, as well as the fastest lateral air speed. The jet boost is similar to Falco's, in which he can also Star KO easily. The move's main drawback is that the Landmaster doesn't last very long, and it falls faster compared to the other two. It lasts 12 seconds, 6 seconds less than Fox's or Falco's Landmaster.

Wolf's Final Smash. Wolf analyzed Fox's Landmaster and built his own improved version, which he now calls out and boards. He's increased the output of the on board generators and upped the vehicle's firepower. However, this has substantially decreased the time the Landmaster can appear on the screen. It sports the same colors as Wolf's Wolfen.

The Landmaster originally appeared in Star Fox 64 (known as Lylat Wars in PAL regions). On the planets Titania and Macbeth, Fox McCloud sets out in the Landmaster for ground combat while the rest of the Star Fox team provide aerial cover in their Arwings. The abilities to roll over and temporarily hover were both in the original game. The Landmaster returned in Assault, where it appeared in certain stages to give Fox an edge over the massive Aparoid army. Assault also demonstrated that the team is capable of teleporting a Landmaster into the combat zone, although the transporter's targeting system was less than ideal as Fox saw when a Landmaster he requested was teleported square in the middle of an Aparoid horde far from his position.

The tank's appearance is a cross between its Star Fox 64 look and its Star Fox Assault look. It maintains the sharp and futuristic appearance it had in Assault, but still has the traditional tank treads from 64 (in Assault, the Landmaster ran on off-road wheels).

Due to its size, the cannon of the Landmaster fires above most character's heads, requiring a bit of strategy to properly use. Despite its size, it only requires only a small 'player' sized piece of land to rest upon, about the size of a Stage Builder block, as collisions with the floor are only registered at the center of the tank. This leads to the Landmaster being able to fall down small gaps, even in a "Mega" Special Brawl, such as the one in the center of Yoshi's Island.

Due to the Landmaster's size, it can not easily maneuver around tight areas or enclosures, such as those found in the Hyrule Temple. Once summoned on Mario Bros., it will be impossible to get to lower parts of stage.

Oddly, both Falco and Wolf use the Landmaster for their Final Smashes, despite Falco having an open hatred of it in Star Fox 64, and never using it outside of multiplayer, while Wolf has never used a Landmaster in any of the Star Fox games. Falco takes note of this with his statement upon activating the Landmaster. It is also worth noting that Falco's Landmaster is also more flight oriented than Fox's.

Fox is given infinite uses of his Final Smash in Event 2: Landmaster Ignition to KO Meta Knight and Sheik.

There is a small glitch when Stage Builder stages are played. When the Landmaster pushes a player against a normal sized block, the player can fall through the block.

On Shadow Moses Island, Temple, Corneria, or on a custom stage, the Landmaster can go down and shakes rapidly up and down. This is the Shake Glitch. 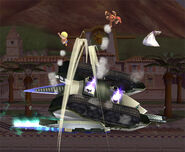 A Landmaster performing a barrel roll. 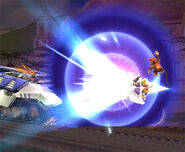