Rare
Kyogre (カイオーガ, Kaiōga) is a fictional creature in the Pokémon media franchise.

Super Smash Bros. Brawl is the first Super Smash Bros. game to include Kyogre, as Kyogre didn't exist when the first two games were made. When summoned from a Poké Ball, Kyogre flies toward an opposing fighter and relentlessly uses Hydro Pump to spray them off-stage. While Kyogre will produce medium damage and knockback on contact, its attack will only push. Different from F.L.U.D.D or Water Gun, it is extremely strong and can easily KO someone. It tends to target one character until it disappears, making it a very effective move on small crowded maps. Kyogre is a rare Poké Ball, as are other legendaries.

A Sea Basin Pokémon. It brought about heavy rains, which formed seas and relieved droughts. It is usually found slumbering at the bottom of an ocean trench. Its attack Sheer Cold is a technique so powerful, it causes any opponent it strikes to faint instantly. In battle, it causes clouds to form and drenches the area in rain. It once fiercely battled Groudon.

In Super Smash Bros. for 3DS/Wii U

Kyogre makes a return as a Poké Ball Pokémon, (as well as MasterBall) it keeps his prime from Super Smash Bros. Brawl except for the fact that it lasts longer on the battlefield.

Kyogre as it appears in the 3DS version of Super Smash Bros. 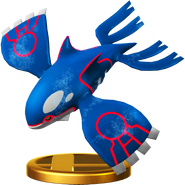