200
The Koopa Troopa (Japanese: ノコノコ, Noko Noko) also known as Joseph, is a character that appears in the Mario universe. It is also an enemy in Stage 1 of Adventure Mode.

Koopa Troopas made their debut in Super Mario Bros. as a common enemy, and has become a common enemy in later Mario games. Along with the Goombas, the Koopa Troopas are some of the most recognizable enemies of the Mario series. They are anthropomorphic turtle-like creatures that are commonly seen in their green and red variations. The green Koopa Troopas are mostly known for walking in one direction until they are defeated or they fall, while the red Koopa Troopas move back and forth on platforms and turn around at ledges.

If a Koopa Troopa is jumped on, they retreat into their shells rather than be defeated altogether, which can be kicked as projectiles. If the shells are left out for too long, however, the Koopa Troopa can emerge out of its shell. The kicked shells can also pose a danger if they bounce off of a wall.

Two Green Koopa Troopas as 8-bit sprites walk back and forth in the background of the Mushroom Kingdom stage. They do not affect gameplay in any sort of way.

The Koopa Troopa makes an appearance in the first stage of Adventure Mode, where they walk back and forth. If you make contact with them, you will take damage. Simply just attack them to make them retreat into their shells. You can pick up their shells and use them like the Green Shell item. Although if the shell is red from a Red Koopa Troopa, it will function like a regular Green Shell, but also burn people. The only difference is that the shells from the Koopa enemy don't disappear. The reason is after a short amount of time Koopa will come back out of its shell and walk back and forth again. This can happen even when the player is holding the shell. To permanently get rid of them you must throw them by picking them up with the "Z" button. You can throw them at your opponents to give them a good amount of damage and maybe even defeating them at low percentages.

Their stance they take in Melee is a crouching but walking on two legs, which is a mix between the original which they walked on all fours, and Super Mario World, which they had walked upright. Also, two 8-bit Green Koopa Troopa cameos in the background of the Mushroom Kingdom stage.

Common soldiers in Bowser's army, Koopa Troopas can retreat into their shells. Unbelievable as it may seem, they're clearly unaware of being kicked and sent sliding when in this position. There are many Koopa types, each with a different shell color and unique traits. They all wear T-shirts and shorts under their shells.

Koopa Troopas make an appearance in Super Smash Bros. Brawl's Adventure Mode: The Subspace Emissary. The green archetype appears as a ground enemy in stages where Bowser's minions are present such as The Jungle and The Lake. Unlike their Melee counterparts, Koopa Troopas will not harm players that walk into them. Instead, they attack with a leaping headbutt. Once they are stepped on, the shell can be used as an item. Also, the Koopa Troopas can emerge from their shells, even while their shell is moving.

A henchman of Bowser. In the old days, they'd retreat into their shells for a short while to protect themselves after being stepped on. Recently, however, some have begun to immediately pop back out. You'll often find them marching straight ahead--if the path ends, they'll just march into the abyss. Surely there are no braver turtles to be found.

A turtle in the employ of Bowser. Koopas formerly traveled on four legs, but they've recently been spotted strolling on two. This has freed up their hands, allowing them to chase Mario with nets. Their adaptability must make Bowser very happy indeed. Unlike their green- shelled brethren, red ones do about-faces when they run out of road. They're a bright group.

Koopa Troopas are the main representatives of Bowser's army. They are just about as common as Goombas. They know no fear, bravely charging ahead even if it means falling off a cliff or into a hole. They do this in Smash Run as well. Defeating them will reduce them to a shell you can throw.

Bowser's go-to foot soldiers. They sport red shells and advance forward, but they have the common sense not to walk off cliffs. During Smash Run, they'll advance toward any fighter they see, attacking with their whole body. These Koopas leave red shells when beaten.

8-bit Koopa Troopas reappear on the returning Mushroom Kingdom stage from Super Smash Bros. They have been updated to more accurately match their original sprites from Super Mario Bros. and are now wearing red shells.

Its spirit battle is a regular battle at Golden Plains against Squirtle (whose turtle-like appearance represents the Koopa Troopa's). The stage and music references the Koopa Troopa's appearance in New Super Mario Bros. 2 where the Koopa Troopas will temporarily turn into Gold Koopa Troopas when the player passes through a Gold Ring. Coincidentally, collecting 100 coins on the Golden Plains stage will turn the fighter into a temporary gold form. Also, Green Shells will spawn more often than usual and the Squirtle puppet fighter will also have increased defense after a while, which represents a Koopa Troopa's shell where a Koopa Troopa will retreat into its shell after being stomped on, rather than permanently defeating it.

As a support Spirit, the player will start battles with a Green Shell once equipped. The Koopa Troopa is also featured in the artwork for the Standard Kart Spirit. 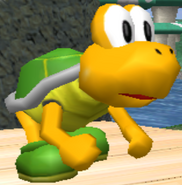 Mario and Yoshi are looking at Green Koopa Troopa Trophy in Super Smash Bros. for Wii U.