Foes are able to use their attack buttons and wiggle their control sticks to escape Bowser's clutches quicker, but if they do not move at all, Bowser can bite the opponent up to eight times, doing 2-3% damage with each bite. The Koopa Klaw has the unique ability of allowing Bowser to grab onto an opponent in midair. If Bowser is holding someone in the move, they can be thrown in two directions: pressing forward on the control stick causes Bowser to slash the enemy upwards, while pressing backwards causes him to hurl the enemy backwards with a large amount of knockback.

The upward slash can lead into another attack or combo, such as an up aerial, forward aerial, or even possibly another Koopa Klaw, depending on the opponents DI.

This special attack is shared by Giga Bowser. 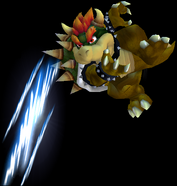 Koopa Klaw being used in midair. 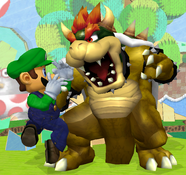 Bowser about to bite Luigi after Koopa Klaw.

Giga Bowser about to bite Bowser after Koopa Klaw.

Koopa Klaw being used by Giga Bowser in midair.

In Super Smash Bros. Brawl and Super Smash Bros. for Nintendo 3DS and Wii U, Koopa Klaw was replaced with Flying Slam, a somewhat similar move, due to both moves involving Bowser grabbing the foe with his claws before inflicting any damage. However, in the Flying Slam, Bowser will grab the opponent, leap up in the air with his opponent under his stomach, and body press him to the ground.