Donkey Kong initiates the Final Smash by slamming down a pair of bongos before playing them. During this time, he will create shockwaves that damage the opponent, making them useful for edgeguarding or trapping opponents between hits. DK remains immobile but invulnerable for the duration of the attack.

If no buttons are pressed, the waves will barely cover DK. However, if the player precisely hit the buttons in accordance to the beat, DK will produce a stronger and more forceful, with its range extending slightly beyond Final Destination and dealing 15%. If the player correctly times four hits, DK will clap, producing a much stronger wave with more knockback.

The timing in Brawl consists of red circles shrinking on the bongos, with the correct hit being when the rings line up with the drums. In Smash 4, an indicator bar shows up with circular beat symbols passing through, with the correct hit being where the symbol passes the indicator on the left side; the bar will keep track of all the correct hits performed in a row with the message Miss!, Good!, or Great! being displayed based on the attempt to match the beat. In both games, Konga Beat can be alternatively timed by pressing just as DK raises his hands to hit the bongos. 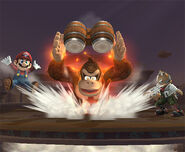 DK about to go to town with some bongos! His performance is so magnificent and upbeat that it creates damage-inducing sound waves. Press the buttons in time to the music, and the sound waves may grow stronger. DK's invulnerable when launching this attack, but he's also immobile, so be careful using it on scrolling stages.

In this Final Smash, DK drums on a set of bongos, just like in the Donkey Konga games. Press the attack button in rhythm with the circles to boost the attack's range and power. Enemy attacks won't affect you, but you can't move, either. Auto-scrolling stages will slow down but won't stop-don't get too carried away in the beat!