This article is about Kirby's appearance in Super Smash Bros. for Nintendo 3DS and Wii U. For other uses, see Kirby.

Kirby has received many buffs and nerfs, balancing him further than in Brawl.

Kirby's taunts are also used to give up his current copied ability.

Pudgy, little Kirby lives in the peaceful hills of Dream Land on the Planet Popstar. He can inhale things with his big mouth, either copying their abilities or spitting them out again. In Smash Bros., Kirby can inhale opponents and copy their standard specials. He gets launched easily but recovers well.

Holding the special button left or right will charge up Kirby's Hammer Flip attack. Charging too long hurts Kirby! The hammer strikes twice in the air, but landing the single blow on the ground is more powerful. Kirby's up special Final Cutter slices up and down, firing a shock wave upon landing.

That green cap sure does make Kirby look heroic, doesn't it? Maybe wearing it just inspired Kirby, but while he's wearing it, he gets all kinds of neat moves, like Spin Slash, Multisword Attack, and Sword Dive. He's even able to pull off these moves in the air, on the ground, or underwater!

Waddle Doo can fire beams form his eye. Does that make you green with envy? Then inhale him and copy that ability! You'll then be able to shoot beams from a wand, and the attack can even be charged up for greater effectiveness. You can also use a beam to push switches or to grab and toss your foes.

The perfect ability to copy in the summer--Kirby gains freezing breath when he copies the Ice ability. Enemies frozen by his arctic blasts can be launched at other foes too. Perfect for a tough fight or when you need some ice for your iced coffee. Kirby isn't busy saving Dream Land or anything...

Kirby normally looks tasty as a big ol' marshmallow, but he's significantly less appetizing when he's copied the Needle ability. Those pokey spikes won't add any flavor at all. With this ability, Kirby can bash into enemies or launch the spikes at them. A great, easy-to-use ability!

Who needs hats when you can have an actual tornado coming out of your head? That's our Kirby--always the trendsetter. And with the Tornado ability, he can go one step further, turning his whole body into a cyclone to go on a wild rampage. His rapid spinning isn't exactly easy to control, but that's all part of the fun!

Curious what Kirby's singing voice sounds like? Then track down and inhale Mr. Tick-Tock or a Walky! Kirby can copy the Mike ability and then use a mike or megaphone to really let 'er rip. Sometime he sounds as cute as he looks, but he can also hit those low notes when he wants to rock.

You don't get to see sleeping heroes very often. They're so busy rescuing princesses or saving the world, they just don't have time for a little nap. Not so with Kirby! The moment he inhales the snooze-prone enemy Noddy, he pops on his sleeping cap and dozes right off. Ah, Kirby, what dreams might you be having today?

When he copies the Bomb ability, Kirby gets to don a stylish hat just like Poppy Bros. Jr. The hat's appearance varies a little from game to game, but the ability itself is always pretty much the same: pull out a bomb, throw it, BOOM! Careful, though--if you hand onto the bomb for too long, you'll go BOOM yourself!

"Show me your moves!" Wait--that's not Kirby's line! Regardless, he's really fired up and ready to become a fighting machine with that red headband. He knows the basics, like kicking and tossing, but he can also muster his fighting spirit to blast distant foes.

Kirby doesn't need copy abilities to bop through the air, but actually having wings gives his aerial skills a definite boost. They even let him use some extra attacks, like the acrobatic Shuttle Loop and the mighty Condor Head. He can also fire at foes with his Feather Gun! Thought Kirby was just a squishy puffball? Surprise!

Making his debut in Kirby's Return to Dream Land, the Moonja enemy looks about as ninja as you can get. If you copy its ability, Kirby can become a master of the ninja arts! With a variety of useful skills like Knife Throw and Blossom Storm, you might want to remain a ninja forever! 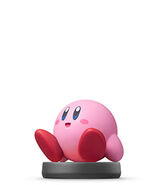 Kirby being screen KO'd
Add a photo to this gallery
Retrieved from "https://supersmashbros.fandom.com/wiki/Kirby_(Super_Smash_Bros._for_Nintendo_3DS_and_Wii_U)?oldid=494864"
Community content is available under CC-BY-SA unless otherwise noted.