This article is about Kirby's appearance in Super Smash Bros. Melee. For the character in other contexts, see Kirby.

Currently, Kirby is ranked 25th in the F tier at the very bottom, a huge drop from his 2nd position in Smash 64. While he has some interesting throw options and a decent edge-guarding game, Kirby's approach and KO ability are among the worst in the game; slow attacks, slow air speed, an ineffective projectile, and numerous other flaws both on the ground and in the air prevent Kirby from easily approaching enemies, and he struggles against almost all characters as a result of this. Kirby currently has terrible overall matchups, with seven matchups that are near unwinnable, and only two positive matchups (against Bowser and Roy), and even these can be disputed at length. 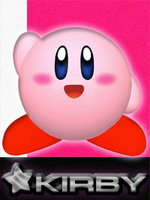 Kirby's signature move is Swallow, which allows him to use his opponents' Neutral Special Moves. Kirby is also known for having five midair jumps (although the last couple of jumps barely give any height) and floaty descent, which gives him good recovery distance. However, his recovery is still slow and predictable. His multiple jumps also allow for good edgeguarding abilities and good midair evasion, due to slow falling speed when normal and fast falling speed when using Stone, especially with mid-air transformation.One of his most rage inducing moves is Kirbycide, where Kirby sucks in the openent, walks off the edge with him, then uses his multi-jump to fly back up to the top.

Kirby's small size, quick dodges, and low crouch (one of the lowest in the game) enable him to have good evasion. He also has a large shield in relation to body size, which makes him difficult to shield stab. Kirby is arguably most famous for his sacrificial KOs, the Kirbycides. These are extremely useful in certain scenarios, but his Back and Forward Throws can be intercepted. When Kirby is in Stone form, he does not take damage, but he can be grabbed out of it.

However, Kirby has several significant problems. Many of his moves are slow, weak (almost all of his moves have tiny sweetspots), and short-ranged. He is easily KOd due to being light and floaty, and he can't escape most combos despite this due to having a high amount of hitstun when hit. He has poor combo ability, his SHFFL'd aerials are slow, and his Up Special Move, Final Cutter, does not have good horizontal range. Also, his grab game is very limited because, as aforementioned, his Back and Forward Throws can easily be intercepted, due to them being easily shaken out of and leave Kirby to die, and only his Down Throw can be used to land another move. Kirby has a very small wavedash, making Wavesmashing hard. Lastly, Kirby's hammer is extremely weak and punishable if not sweetspotted, which is hard to do as the sourspot is much larger.

To win as Kirby, one will need to be very careful with most of his attacks which, like stated above, almost all of them have sweetspots, making those attacks unreliable. Kirby's Throws, Side Smash and Up Smash are his reliable KOing attacks, but warning with Throws, as sometimes Kirby will let go of the opponent and KO only himself. In tournaments, Kirby won very few, if any.

Kirby was overwhelmingly nerfed in his transition from Smash 64 to Melee. He is unarguably the most severely downgraded character from Smash 64 to Melee, and possibly the most severely nerfed character in all of the series. Kirby's nerfs primarily damaged his excellent finishers and good approach, with his various buffs failing to address his lack of reliable combos or significant survivability issues from the previous game; on the contrary, his nerfs downgraded his combo potential and made him easier to KO in Melee.

Like other characters, Kirby received some changes in the PAL version of Melee, which slightly buffed him overall, but are not enough to heavily affect his tournament results.

In addition to the normal trophy about Kirby as a character, there are two trophies about him as a fighter, unlocked by completing both Adventure and All-Star modes respectively with Kirby on any difficulty:

Kirby
A denizen of the far-off, peaceful planet Pop Star, Kirby became a citizen of Dream Land after defeating King Dedede. Even though he's only about eight inches tall, Kirby is an extremely skilled technician. He has the unique ability to absorb the powers of his enemies, and his elastic body makes him a versatile adventurer.

Kirby (Smash Red)
Kirby's small size lets him dodge many attacks, but his light weight makes him fly far when struck. Using his ability to inflate, he can jump five times. His Swallow attack creates wild combos; not only can he copy foes' moves, but he'll also put on special hats and mimic their voices. His Hammer is unwieldy but powerful.

Kirby (Smash Blue)
Because of his light weight, Kirby is always in danger of being sent flying, but his ability to puff up and fly allows him to come back from amazing distances. His Final Cutter strikes on the way up and on the way down, and it sends out a beam of force upon landing. Kirby transforms into various objects and crashes down when he uses his Stone technique. 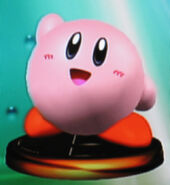 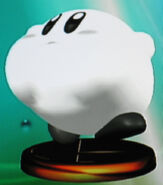 Kirby is also the subject of five trophies that can be considered its own trophy series: The Kirby Hat series, with information about the powers Kirby gains when he uses Swallow on each opponent. The first three are "normally collectible" trophies that can be found during normal play and in the Trophy Lottery, but the last two are awarded once all the playable characters involved on those trophies have been unlocked.

Finally, the character Kirby himself is depicted on some other trophies not related to gameplay: Ball Kirby, Fighter Kirby, and Fire Kirby.