Kirby (カービィ, Kābī) is the main character of the Kirby series of games. He was created by Masahiro Sakurai, who also created the Super Smash Bros. series. The series has been running for two decades, and nearly thirty titles have been released under Kirby's name, most of which are developed by HAL Laboratory, Inc.

Kirby's round pink form is only 8 inches in height (though in his appearances in the Super Smash Bros. series, also created by Sakurai, his dimensions are obviously enlarged).

Kirby is a resident and the consistent hero of the yellow star-shaped planet Pop Star. He can inhale forcefully, allowing him to swallow enemies in front of him and copy their abilities to fight back (known as a copy ability). He can also store the air he inhales, making himself large and puffy, enabling him to float around. His species, of which himself and Meta Knight are the two most prominent individuals, is not officially named, but is most commonly referred to as "Kirbies" or "Star Warriors".

Kirby is a starter character in Super Smash Bros..

He is known for his great recovery, quick attacks, his awesomely fast up tilt, and surprisingly long-range aerials, all of which place him rather high in the original game's Tier list. His trademark move is Swallow, which allows him to suck in enemies and emulate their neutral B attacks.

The 8-inch high Kirby hails from a distant, peaceful star. Like his simplistic appearance, he is an easily-understood character. True to his instincts, Kirby eats when he gets hungry and sleeps as soon as he grows tired. Nevertheless, Kirby remains a formidable opponent. In addition to his distinct flying and swallowing skills, he also has the ability to copy enemy attacks for ever-changing action. 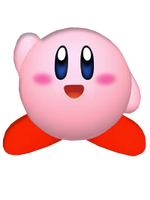 He receives a redesign as a fighter that includes the Hammer Special Move as his new forward-B move. He is still a floaty, lightweight character that can jump five times in midair. However, Kirby has been nerfed, losing most of his power, speed and range compared to his appearance in the original Super Smash Bros. He currently ranks 26th on the Tier List but used to be on the 25th spot. Making him the worst character in Melee.

Kirby is the most extensively represented character in Melee trophies: In addition to having his set of three trophies earned through single player modes, there are five trophies named "Kirby Hat" that provide information about the powers he gains with his in-game Swallow ability. See Kirby Hats (SSBM).

A denizen of the far-off, peaceful planet Pop Star, Kirby became a citizen of Dream Land after defeating King Dedede. Even though he's only about eight inches tall, Kirby is an extremely skilled technician. He has the ability to absorb the powers of his enemies, and his elastic body makes him a versatile adventurer.

There are also trophies depicting Kirby in various guises he has taken in Kirby games:

When Kirby swallows a ball enemy, he turns into a ball and can bounce off of floors and walls. It's tough to control, but well worth it for the strong attack power it gives Kirby. After his debut in Kirby's Adventure, Ball Kirby has popped up in several more Kirby games, such as Kirby's Pinball Land and Kirby's Block Ball.

Kirby dons a warrior's headband and becomes a fierce fighter when he swallows an enemy skilled at physical attacks. Fighter Kirby uses many colorful punching and kicking moves as he overpowers his enemies with his sparring skills. The Vulcan Jab is just one of the many techniques Kirby can use thanks to his copying power.

When Kirby swallows a fire-wielding enemy, he transforms into Fire Kirby. Not only does he breathe fire in this form, but he can also sprout flames on his entire body and damage enemies by crashing into them. Fire Kirby wears the bright red headdress of his enemy Burning Leo. The hat turns into a helpful weapon when thrown.

Kirby returns for his third appearance in the Wii version of the Smash series. He was revealed in all trailers for Brawl' before its release (also being the only character who didn't undergo drastic changes in graphics, as shown by the trailers), and was confirmed on the official website on June 7, 2007.

He rounds out the roster again as a starter character, and is finally not the sole representative character for his series with the inclusion of King Dedede and Meta Knight. He is significantly faster and stronger and has greater range. It may seem that he is a lot closer to his N64 glory days; he may not be as hard hitting as he was in the original, but he is tougher to K.O. In this game Kirby has the ability to inhale and swallow items, but inhaling an explosive item will harm Kirby exploding when swallowed.

As always, Kirby's moves are related to his copy abilities. For example, his combo attack (where he throws out three punches repeatedly) is known as the "Vulcan Jab" from the anime (ep 19) and from the games (Fighter Kirby).

Kirby has a lot of trophy versions of himself in Brawl.

Kirby
A round, pink ball of cuteness from a distant, peaceful star. He can swallow anything with his gigantic mouth, then spit it out as ammo. He has the handy ability to copy powers and use them as his own. His hovering ability lets him fly through the air with ease. He's so round, he's sometimes treated like a ball.

Beam Kirby
Kirby in a jester cap...and a supercute Kirby at that. Beam Kirby features a Beam ability, acquired by inhaling Waddle Doo, that allows him to shoot a whiplike beam at his enemies. With a wide attack range, this ability is extremely easy to use, especially for taking out enemies in bunches. In Kirby Super Star, this beam can also be charged and fired.

Needle Kirby
A Kirby ability made when Kirby inhales a spiked enemy. When attacking, the needles on Needle Kirby's body extend, giving him a porcupine-like look. This ability provides both offensive and defensive measures against nearby enemies. Plus, needles which extend on Kirby's underside when jumping eliminate any threats on landing.

Sword Kirby
A Kirby ability made when Kirby inhales a sword-wielding foe or a sword itself. Doing so provides Kirby with a rapid sword slash, a jumping sword spin, or even the energy-beam blast of the Final Cutter. It wouldn't be a stretch to say that this is the #1 Copy Ability in terms of accessibility.

Sleep Kirby
Kirby after he copies the ability to sleep peacefully. Kirby takes on this form when he inhales Noddy or other such enemies. Kirby cannot move at all while sleeping, so extra care should be taken not to use this ability when enemies are near. Kirby, in his slumber, tends to drool, and in his panicked awakening, isn't it cute how he forgets to wipe off the drool?

Wing Kirby
Kirby when he inhales a winged enemy and copies its flying ability. This ability can be used to proceed through strong winds that would otherwise be too tough to overcome. Wing Kirby can also perform a plethora of attack moves, such as the Bomber Head, where Kirby dive-bombs onto enemy heads.

Fighter Kirby
Kirby when he is skilled in martial arts, especially close-quarters combat. Inhaling brawny challengers like Knuckle Joe will transform Kirby, allowing him to use a bunch of fight moves like Rising Break, the heroic uppercut. His Mega Power Shot in Kirby & The Amazing Mirror, which used charged energy to take out faraway enemies, is another Fighter Kirby highlight.

Fire Kirby
Kirby when he inhales an enemy who uses fire. Shooting fire from his mouth, Fire Kirby can cook enemies from afar. This ability also allows Kirby to light explosive blocks, fuses, and so on. In Kirby Super Star and Kirby & The Amazing Mirror, Fire Kirby can roll his burning body into enemies as an attack move.

Ice Kirby
Kirby when he copies an enemy with chilly abilities. Ice Kirby can blow an icy wind from his mouth and freeze enemies solid. These frozen enemies can then be knocked into other enemies as an additional means of attack. These blocks are not only effective against enemies but can also be used on terrain such as magma or water.

Plasma Kirby
Kirby when he inhales Plasma Wisps, which glow with a neon green flame. Plasma Kirby can charge the plasma strength up to a maximum level of 5. In Kirby Super Star, your attack--be it a Plasma Laser or a Plasma Wave Cannon--varies with the length of time you charge it.

Tornado Kirby
Kirby when he inhales enemies that fly around like twisters through the sky. When in tornado form, Kirby can spin freely through the air for short amounts of time, clearing out groups of enemies. Tornado Kirby will continue spinning and bouncing violently off of obstacles until he comes to a stop. One drawback of Tornado Kirby is the control difficulty.

In Super Smash Bros (Wii U and 3DS)

Kirby returns as a playable character in SSB4, with some changes. His Final Smash has been replaced by Ultra Sword. He also has a new special move: Hammer Flip, which allows him to charge up his hammer and deal a powerful attack, depending on how long it has been charged for.

The English Wikipedia has an article on Kirby (character). Based on the article's quality, it can or can not be used to improve this article.
Retrieved from "https://supersmashbros.fandom.com/wiki/Kirby?oldid=477275"
Community content is available under CC-BY-SA unless otherwise noted.