Masahiro Sakurai
King Dedede (デデデ大王, Dedede Daio?) is a major recurring antagonist (and anti-hero) and a minor tritagonist from the Kirby series. He is a giant penguin-like being who wields a large wooden mallet, and has been the apparent main antagonist of the Kirby series since its beginning. His powers are vaguely similar to Kirby's; he is able to puff himself up and float (although he only got this ability through rigorous training after his first defeat at Kirby's hands), and suck up enemies and spit them out as high-speed projectiles (unlike Kirby, he cannot copy a foe's ability). He can use both of these abilities in Super Smash Bros. Brawl, Super Smash Bros. for Nintendo 3DS and Wii U, and Super Smash Bros. Ultimate.

King Dedede is the selfish, grumpy, self-proclaimed king of Dream Land. He has appeared as Kirby’s rival and nemesis in every Kirby game (with the exception of Kirby & The Amazing Mirror) since Kirby’s Dream Land. He is a hammer-wielding penguin with fine robes and a greedy disposition. While his more heinous actions are influenced by being possessed by Dark Matter, he is usually considered to be the main villain of the Kirby series. However, a common misconception about King Dedede is that he is an "evil" character. He seems to be more selfish than evil and appears to otherwise have a good heart. Most of the games where Dedede is evil is where he is being possessed. He was possessed three times by Dark Matter, once by Yin-Yarn, and once by Taranza. King Dedede's actions range from stealing food from the Dream Land residents in Kirby's Dream Land to breaking the Star Rod, source of power in the Fountain of Dreams, into seven pieces in Kirby's Adventure (although this latter was to protect Dream Land from an evil it did not know about). However, he is not above teaming up with Kirby as a friendly rival on occasion, such as in Kirby 64: The Crystal Shards, Kirby: Canvas Curse, or Kirby's Return to Dream Land. King Dedede's relationship with Kirby is more along the lines of friendly competition, begrudging admiration, and annoyance on both sides than flat-out hatred or villainy.

King Dedede also makes an appearance as a main antagonist in the animated TV series, Kirby: Right Back at Ya! (known as "Hoshii no Kaabii" in Japan), once again as the self-proclaimed king. He is usually accompanied by his snail-like sidekick, Escargoon (Escargon in Japan), and has an army of Waddle Dees at his command, akin to the games, with a single Waddle Doo as the commander. While he is the king, he appears to take no administrative role for the kingdom, and most of the characters simply ignore his rule. His role in the anime is much more comical, but also more mean-spirited and evil. He is also much less intelligent than he appears in the games, and his bumbling attempts to cause Kirby to become less popular usually end up failing very miserably.

In the original Super Smash Bros., King Dedede only made a mere brief cameo in the background of the Dream Land stage. According to a page on the Japanese Super Smash Bros. site, King Dedede was planned to be a playable character, but space and technical limitations caused him to be cut from the roster.

King Dedede only reappeared in the Dream Land stage once again, and also making another appearance as a trophy. Once again, he was planned to be a playable character but was cut because of time restraints (the same reason that kept him out of SSB64).

King Dedede makes an appearance as one of the 200+ collectible trophies in the game that can be found by "typical" means—either through the Trophy Lottery or picking it up during one of the single-player Regular Matches. Its trophy reads like so:

King Dedede
Dedede is the self-proclaimed king of Dream Land. While he says he's king, Dedede prefers no administrative functions and the citizens of Dream Land continue to live as they always have. He's able to suck in air and fly like Kirby does, but only as a result of vigorous training he undertook after being bested by Kirby. 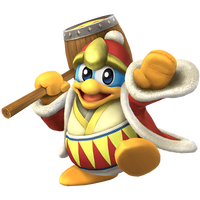 King Dedede finally becomes a playable character in Super Smash Bros. Brawl, making him the third playable character from the Kirby series. He wields his trademark hammer, swinging it in most of his standard attacks, like the Ice Climbers, and has very powerful hammer-based attacks. His special moves are Inhale (Neutral Special), Waddle Dee Toss (Side Special), Super Dedede Jump (Up Special), and Jet Hammer (Down Special). Inhale is very similar to Kirby's trademark move, except King Dedede lacks the ability to copy abilities. Waddle Dee Toss lets the king throw his minions at foes, sometimes producing not only Waddle Dees but also more deadly Waddle Doos and Gordos. It is also possible for Dedede to throw out capsules containing items. Super Dedede Jump is an effective recovery move, sending King Dedede high into the air, then crashing into the ground to damage foes. He can also cancel out of doing this. Finally, King Dedede mechanizes his hammer with Jet Hammer. The hammer's power is charged up by holding the special attack button, and then released for a mighty swing. King Dedede incurs damage after charging for too long, however. His dash attack and Super Dedede Jump come from Kirby's Adventure.

Like other playable characters, King Dedede appears visually similar to his canon incarnations but greatly enhanced graphically. For example, his usually uncovered girth (other than his patterned waistband, that is) is now covered by fine robes of a similar color, making his overall wear resemble a kimono. He also has several interesting costume colors, which not only change the color, but the design on his waistband too, including a sepia-toned one. His voice is provided by Masahiro Sakurai himself.

King Dedede
The self-styled king of the amazingly peaceful Dream Land. He continually does things unbecoming a king, like stealing the kingdom's food supplies or all the stars from the sky. He's not all bad, though, and sometimes performs good deeds. While he and Kirby often battle, they've been known to compete good-natured at speed-eating contests and minigames. 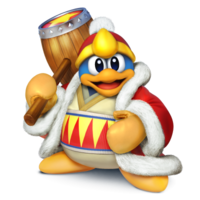 King Dedede returns as a playable character in Super Smash Bros. for Nintendo 3DS and Wii U. His appearance has been changed to give him a more cartoonish look, reminiscent of his appearance in Kirby: Right Back at Ya!.

A majority of King Dedede's attacks have been changed from the previous game, such as now performing a cartwheel attack for his Down Tilt, and his Side Special Move has been changed to Gordo Throw, which involves Dedede batting a Gordo forward to attack opponents. Additionally, King Dedede's Final Smash has been changed to Dedede Burst, which involves Dedede inhales the nearby opponents in place before hammering them and launching them away with an exploding bomb.

King Dedede can also appear flying in the background of the Dream Land (64) stage that returns as downloadable content, though he does not appear if he is part of the battle.

King Dedede
He calls himself the King of Dream Land, but he doesn't have a lot of interest in ruling. He really loves to eat, so it's no surprise he's a heavyweight fighter. Despite his size and low speed, he can easily recover with his four jumps. His Jet Hammer will leave a mark on everyone he meets.

King Dedede (Alt.)
For the Gordo Throw side special, King Dedede sends a Gordo bouncing with a hammer strike. It bounces off walls—or sometimes gets stuck in them. After a while, it'll disappear. If an enemy hits one, it'll bounce back toward you. Use the special again to whack it back at them!

King Dedede once again returns as a playable character in Super Smash Bros. Ultimate. As with many other characters of the roster, he has been given more facial expressions to fix the cartoonish look of the game.

Retrieved from "https://supersmashbros.fandom.com/wiki/King_Dedede?oldid=600771"
Community content is available under CC-BY-SA unless otherwise noted.