K.K. Slider as he appears in Animal Crossing: New Horizons

Totakeke (とたけけ), best known by his stage name K.K. Slider, is a special character from the Animal Crossing series that plays music for the player's village.

He appears every Saturday night as a background character on the stages Smashville and Town and City. A Mii Fighter Costume modeled after him is also available as DLC in Super Smash Bros. for Nintendo 3DS and Wii U.

Totakeke is a white-furred Jack Russell Terrier who is based on longtime Nintendo composer Kazumi Totaka, hence his name (the two even share the same birthday of August 23). He is very chill and laidback, something that is exemplified in his text boxes, often speaking in a very mellow tone (regularly using words like "far out" and "groovy" in his lexicon). Though often known to be very calm, he also has an outgoing and active side to him as his persona DJ KK.

He works as a musician, performing small and intimate concerts for villagers; in the first Animal Crossing, he can be seen outside the Train Station, later moving to Brewster's Roost café in Wild World and City Folk, Club LOL in New Leaf, and in front of the Resident Services building in New Horizons. He is passionate about his craft and only gives music away to players after asking for a CD free of charge, defying the "industry fat cats" from capitalizing on his recordings. In New Leaf, his music can be purchased from stores, but as he states in Happy Home Designer, his earnings from those go to kids and prefers to make Bells through traditional means such as fishing.

K.K. Slider is usually performing every Saturday night from 8PM to 12AM (usually the only time he appears in the game). Players can request a specific song, tell him their mood, or just let him pick one at random; afterwards, he will add a bootleg recording of the song he just performed into the Player's inventory. In New Leaf, he is a regular performer at Club LOL, now appearing every day (except for the regular Saturday) at 8PM as DJ KK, where he will play remixes of his songs. In New Horizons, Tom Nook and Isabelle make an effort to get K.K. Slider to perform on the Player's island, which can only be done if the island has a 3 star rating; afterwards, he can be seen practicing every Saturday (unless there is an event, in which he will delay his appearance at the next available day), but will not take requests until 6PM. Outside of the concerts, he will also make an appearance when the Player is starting a new save file to help set up a new village or island.

K.K. Slider's only appearance in Melee is as a Trophy, though under his real name as Totakeke. As Animal Crossing had yet to be released in the west at the time, his home game is listed as "Future Release".

A wandering musician whose daily life is a bit of a mystery. He plays in front of the train station every Saturday night starting at 8:00 p.m.. He has a large repertoire and plays both old and new hits from all over the world. His music is so ingrained in the villagers, it's impossible to imagine them living without it.

True to the original games, K.K. Slider makes a cameo on Smashville, but only on Saturdays from 8PM to Midnight in real time (based on the Wii's internal clock). He will hold a concert during the match, which the rest of the villagers will attend but pay no attention to the battle like normal. He will play one of six songs chosen at random at the start of every match; they are "K.K. Cruisin'", "K.K. Western", "K.K. Gumbo", "Rockin' K.K.", "DJ K.K.", and "K.K. Condor".

K.K. Slider is also a part of Event 26: The Slow and Easy Life, where he will always appear regardless of the actual time of day. The event requires Ness to defeat a tiny Olimar team of 3 before K.K.'s performance of "Rockin' K.K." ends (2 minutes and 14 seconds).

Another one of K.K. Slider's songs, "Go K.K. Rider!", is remixed for the game. His vocals can also be heard on the new arrangement for "2:00 A.M." Both can only be played on Smashville.

The K.K. Slider trophy can be obtained after unlocking all songs in the game.

A wandering musician. He plays concerts every Saturday night at the Roost in the basement of the museum. All he carries is a single acoustic guitar, but he can play music from all genres. You can request a single tune per concert, and afterward he'll give you a recording of the song to take home. In Animal Crossing: Wild World, his playlist included 70 songs.

As Smashville is a returning stage, K.K. Slider resumes his role as a background character from the previous game, though now this is expanded onto the new stage Town and City; for the latter stage, he will only appear in the Town section. He appears every Saturday night from 8PM to Midnight in real time (based on the Wii U's internal clock) and performing any of the same songs from the last game.

The remix of "Go K.K. Rider!" returns, as does "2:00 A.M." which features K.K. Slider's vocals. A new remix of "Bubblegum K.K.", one of his new songs in Animal Crossing: New Leaf is also available.

A costume for the Mii Gunner modeled after K.K. Slider was made available initially as part of a promo with 7-Eleven Japan, before being made free for all players as a part of v1.1.0. The gun is his acoustic guitar.

The DJ KK trophy is exclusive to the Nintendo 3DS version.

"Yo yo yo! Come rock out at Club LOL! Featuring DJ KK every night of the week (except Saturdays)! Listen to the singer- songwriter bust out a foot-stompin' mix of tunes! Don't forget to come on your birthday for a special treat!" ...That advertisement definitely catches the eye.

"Get down at Club LOL! DJ KK is IN da HOUSE, spinning a NON-STOP mix of the best beats EVERY SINGLE NIGHT!*

A Special TREAT for birthday VIPs!"

What an ad! So many capital letters...

The K.K. Slider trophy is exclusive to the Wii U version.

His fans can't wait for Saturday evenings. Why? Because K.K. Slider performs live! The crowd goes wild when K.K. Slider plays some of his greatest hits, like K.K. Samba, K.K. Waltz, and K.K. Stroll, on his acoustic guitar. He sometimes even takes requests! Other days, you can find him spinning tunes at Club LOL as a DJ.

Fans of this groovy dog just can't wait for his live show every Saturday night. With his trusty acoustic guitar, he'll treat you to such delights as the K.K. Samba, the K.K. Waltz and the K.K. Stroll. He even takes requests! In Animal Crossing: New Leaf, you can also find him on other days of the week working as a DJ at Club LOL.

With both Smashville and Town and City returning for Ultimate, K.K. Slider resumes his background character role, once again appearing every Saturday night from 8PM to Midnight in real time (based on the Nintendo Switch's internal clock). All Music featuring K.K. Slider on vocals also return, now available in all Animal Crossing stages (save for his Saturday night tracks, which can only be played on the two aforementioned stages).

The Mii Fighter Costume modeled after K.K. Slider also returns, now as part of the base game. It must be acquired separately in the Shop; the hat is available for 900G, while the outfit is 1200G. 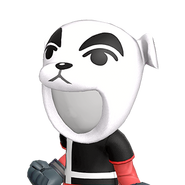 A Spirit of DJ KK is available in the base game. It is a Primary Neutral Spirit under the Advanced class. His Spirit Battle uses a white Duck Hunt with temporary invincibility and is accompanied by a team of three Villagers as well as fellow popular musicians the Squid Sisters. The stage is Fourside (due to being at night, referencing K.K. Slider's usual Saturday night appearances) and the song that plays is "2:00 A.M." Only Duck Hunt must be defeated to win.

The DJ KK Spirit can also be summoned by using the Spirit Cores of 9-Volt & 18-Volt and Labrador Retriever, or by scanning in the K.K. Slider amiibo. It is also enhanceable; when it reaches Level 99, it will transform into his regular appearance with the acoustic guitar. It is a Primary Neutral Spirit under the Ace class.