The stage is divided into three parts. The right and left sections are about equal in length and are a little taller than the middle section. The middle section is the longest, with a smaller platform suspended above it. This stage may look simple but is actually rather dangerous. Getting caught in the current under the stage is likely to result in a KO as it is hard to get back on the stage. Klaptraps swim by every 10 seconds (in Brawl), jumping out of the water to attack (30% damage), resulting in a one-hit KO.

In Brawl, however, it is easier to get back on stage when caught in the current because all characters can swim for a time, floating in the river rather than sinking. The swift current will still carry players to the left very quickly. This makes the right side of the stage considerably safer. Although none of the characters have swimming animations in Super Smash Bros. for Nintendo 3DS, fighters will still move swiftly leftwards. In Ultimate, the current is much slower, making it easier to recover when in the water.

This stage is infamous for causing glitches in Melee with CPU characters. Many computer-controlled characters will regularly self-destruct, even when set to Level 9. However, those glitches have been fixed in Brawl. Some odd behaviors include:

The middle building of this stage resembles Cranky's Cabin with minor differences. One of the difference is the cabin in Donkey Kong Country had sheets of ribbed metal for a roof and the roof in this stage is made out of wood. Cranky Kong makes a cameo appearance as a silhouette and can be seen inside his cabin. He can be seen at times on his rocking chair.

In Donkey Kong 64 Cranky Kong no longer advice, but he is now a scientist who gives the Kongs chemicals that give them certain powers to proceed through the game. Inside the cabin of this stage can be seen an Erlenmeyer flask and test tubes filled with chemicals. This is a reference to Cranky being a scientist in Donkey Kong 64.

Also common in Donkey Kong Country are barrels. They are used primarily as a weapon. A building made out of a giant barrel can be seen in the left of this stage. In the background near the sunset, a flock of Neckies can sometimes be seen flying across the horizon from left to right. In Donkey Kong Country, Neckies were another common enemy.

The song used in Jungle Japes comes from the jungle levels in Donkey Kong Country.

Cranky Kong's cameo in this stage. 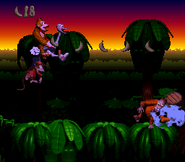 The sunset background of this stage may be based on the Orang-utan Gang level, seen here in Donkey Kong Country.

Jungle Japes as it appears in the background of Diddy Kong's profile of the Super Smash Bros. Ultimate website.